When I was a kid growing up in Michigan, I wished for a white Christmas and hoped the snow, with periodic additions of fresh whiteness, would stick around until spring. While my wish was never completely realized, being 150 miles north of where I live now, winter was a more satisfying if not tiring experience.

(Images may be clicked on for a better view)

The low December light pierces the open canopy revealing patterns in leaves and the geometry of trees and river.

A few days ago, we woke up to a light covering of white. We rushed down to our local city park before too many foot steps marred it’s beauty. Now, despite colder temperatures, the snow is mostly gone, the victim of wind and sublimation. Winters are like that in central Ohio. Cold temperatures, when they come, often leave the dry, naked, and shivering landscape wishing for a warm white blanket. But while not a paradise for lovers of snow, for those willing to venture out and look carefully, this time of year provides an opportunity to enjoy a subtle beauty and be entertained by creatures making this place their winter home. 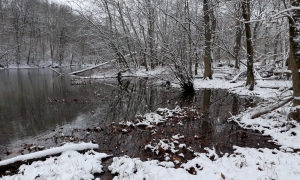 With snow, the forms of water and trees becomes sublime.

It was very faint but unmistakable. You know how woodpeckers can be. Looking up into branches in the adjacent woods, it seemed hopeless. How about just looking for dead branches  .   .   .

Working on a warm winter home?

A female Downy works away. 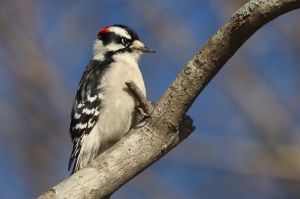 One advantage to living in an area subject to cold temperatures, but with little snow, is that ice is free to express itself. 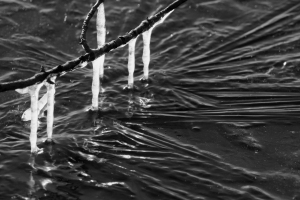 Small icicles and patterns in ice.

Near the river, a small frozen pool, and solstice ice.

In the summer we don’t notice as many Eastern Bluebirds, a gift of the colder months? 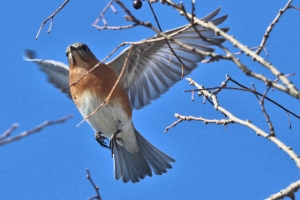 Not far from their downriver nest, Bald Eagles are seen more often along the reservoir this time of year.

Perched across the reservoir and too far away for a really good shot.. 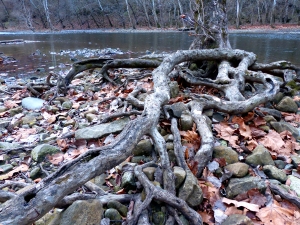 At river’s edge, the roots of a sycamore struggle to maintain their hold.

With the reservoir frozen, a pair of Hooded Mergansers were spotted in the open water of the river just below the dam. Eventually, if the reservoir stays ice covered, they will be joined by Goldeneyes, Common Mergansers, and other waterfowl not commonly seen in the area. 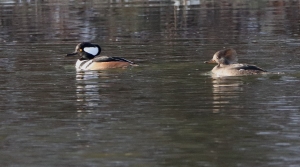 Hooded Mergansers on the Scioto River.

These images were taken before realizing that the White-breasted Nuthatch it was eating lichen. An unexpected revelation.

A quick look through the binoculars revealed it to be a Mockingbird which was a real treat as we couldn’t remember the last time one was seen in the park   .   .   .  then, one very average photo, and it was gone.

There are a countless number of American Robins in the park this time of year. They are everywhere, and with their antics provide endless entertainment.

Brown Creepers are not easy to spot. Sometimes their faint call is heard before they are seen. Their erratic movement make them a difficult subject to photograph.

While working on a dead branch, this male red-bellied woodpecker really showed off it’s red head.

Other local residents, as will as migrants from the north, have also entertained us in the last few days.

White-throated Sparrows can be found in Ohio in the winter but call the forests across Canada, the northeastern U.S., and the northern Midwest their summer home.

A fox squirrel ran up the tree and hid just as I walked up causing my wife to miss a “good” picture. She had to make due with the image below.

Winter along the Scioto River.

This morning while standing in front of our church greeting incoming worshipers, a ruby-crowned kinglet flew into a nearby evergreen, paused for a moment as if to look my way, then flew off. Enchanted by what was an unusual occurrence, I had an extra big smile for the next group of parishioners. In nature the usual can also become enchanting, and in that enchantment, we may lose ourselves and in doing so find that we have become part of something much greater.  We wish everyone the happiest of holidays and a wonderful new year!

3 Comments on “Celebrating The Season”