A Warbler Fascinates and Delights

We are blessed to have Prothonotary Warblers nesting in central Ohio. Much of the nesting success can be attributed to the numerous nested boxes that have been installed and maintained in the habitats favored by this delightful bird. During hikes and while canoeing we also see nesting activity in abandoned woodpecker cavities. It is always a little more special to observe the prothonotary’s behavior in a natural setting. Especially for the photographer.

Some interesting facts: “Prothonotary Warblers forage in the understory, slowly hopping along branches, twigs, and on the ground in search of food. Sometimes they climb up tree trunks and pick insects off the bark similar to the way a Black-and-White Warbler forages. When the male establishes his territory he searches for potential nesting sites in standing dead trees and places a layer of moss in each hole. He selects a few good spots and displays in front of each site for the female. He flies slowly up above the tree canopy with tail spread and slowly flutters back down. To entice the female to check out potential nesting sites, he enters and exits the hole several times. As soon as the female selects a site, she starts building a nest. On the breeding grounds males and females aggressively defend their territories, chasing away intruders with snaps of their bills and sometimes with physical attacks. They are monogamous and maintain their bonds during the breeding season. –  –  –  Prothonotary Warblers are uncommon to fairly common in good habitat. Their populations declined over 1% per year from 1966–2015, resulting in a cumulative loss of 42% over that period,”. Ref: Cornell All About Birds.

One such area not far from our home is the O’Shaughnessy Nature Preserve Twin Lakes Area along the Scioto River watershed north of Columbus. We decided to use a canoe to explore the area thinking that it would provide the best access to the birds. Many of the birds in this area seem to be using nesting boxes.

You never know what birds will do and even while shooting it’s often not obvious because one to preoccupied making sure the subject is in focus, especially when you’re in  a moving canoe. Having said that, we were excited to find a prothonotary in the process of obtaining a meal. 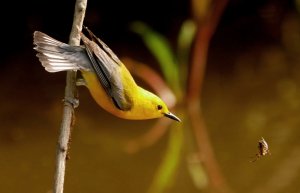 A tasty morsel, an orb weaving spider is spotted, (Donna). 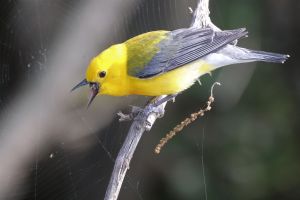 A little later, and not more than 100 yards from where the spider used to live, another sighting. Could it be the same bird? This one decided to sing, perhaps energized by a recent meal? 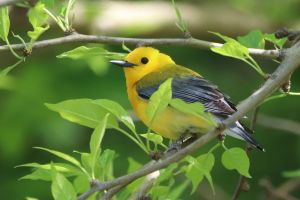 . . . and then as if working towards a grand finale, singing with some stomping (actually scratching).

As mentioned in previous posts many warbler pass through central Ohio but we are blessed to enjoy this one just a little longer.

← Bringing Up The Rear
Getting Along Just Fine →

3 Comments on “A Warbler Fascinates and Delights”