So far this spring it’s been colder than normal and rainy. Migrating birds and the resident wildflowers that would have enchanted us in the first week of April continue to be illusive.

A couple of days ago we returned from a local metro park with just the barest of photographic evidence that spring is actually here. Today, as I write this, snowflakes can be seen outside the window fortunately disappearing on contact with the ground.

But despite the disappointments in the field something that we’ve not previously experienced was taking place much closer to home. From time to time during spring migration our very urban front yard has been a stopover for some fairly exotic migrants that stay at most an hour or two before moving on. However, recently we observed a Yellow-bellied Sapsucker foraging for food in our Sweetgum tree and it continued to do so for four consecutive days and counting! This male bird seemed to spend the whole day in the tree because just about any time we looked out there it was. Where it spent the night, we cannot say. We were astounded!

Why the bird hung around for such a long period of time we cannot say. Perhaps its normal behavior and just something we’ve never experienced. The mystery remains.

One evening while we watched the sapsucker, a little higher up in the same tree another bird caught our eye. It was in the middle of dinner!

Sometimes after paying our dues with long hikes though the seemingly barren early spring woods nature comes to us. Go figure.

In nature it would seem that there is always a lot more going on than we know.

After our extended stay in Florida to escape the north’s cold cloudy winter weather I realize we’re not going to get much sympathy when we say that waiting for spring in Ohio can try one’s patience. Walking through the woods we remind ourselves to value each day for the gift that it is, but with autumns now bleached and faded leaves covering a seemingly lifeless forest floor it’s hard not to want for more.

The water was running clear but the landscape was no more colorful along the river, Battelle Darby Creek Metro Park.

However, taking a closer look at last years leaf litter one just might find the tiny Harbinger of Spring one of the seasons first wildflowers. 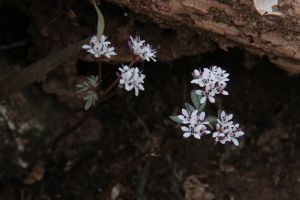 The Snow Trillium is an uncommon wildflower that occurs only in very select undisturbed locations. 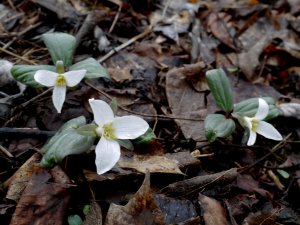 A nice group of three.

Perhaps one of the prettiest plants to pop up through leaf litter in early spring is Virginia Waterleaf. 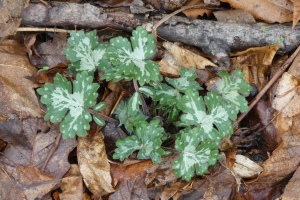 As is often the case while making one’s way back to the trailhead, happy with the wildflowers and the day’s hike, other unexpected and wonderful things are seen. 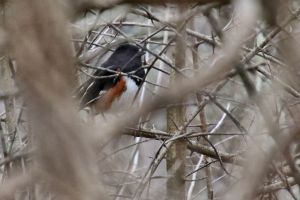 A number of Golden-crowned Kinglets showed themselves along the Scioto River below the Griggs Reservoir Dam, (Donna).

Walking along Griggs Reservoir we heard a faint tapping and just saw a tail protruding from a newly formed nesting cavity. The tapping stopped and this Downy Woodpecker turned and peered out at us.

We spotted this Blue-winged Teal in a pond adjacent to the parking lot as we were finishing a hike at Battelle Darby Creek Metro Park.

Present in smaller numbers all winter in areas where there is open water, the population of Great Blue Herons has increased as the days get longer and the weather warms. 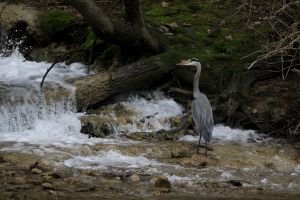 A Great Blue Heron waits for something edible to appear.

We’ve never seen them over-winter so when Great Egrets appear along the Scioto River below the Griggs Reservoir Dam each spring in breeding plumage it’s a real treat. 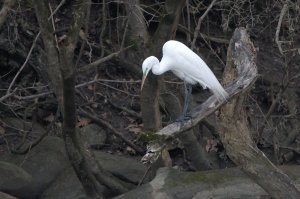 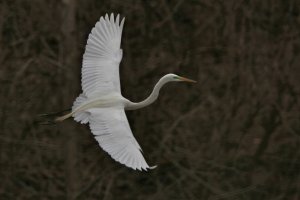 The Great Egrets are the grand finale to this post and our recent time outdoors and they left us with a true sense of  spring’s wonder and magic. 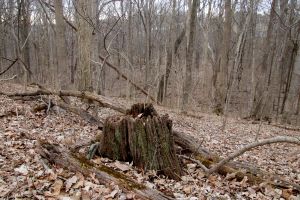 Stump in the early spring woods.

For those who expectedly seek it along a stream or wooded trail, nature speaks in a language beyond words.

Nature Is My Therapy