August brings quiet to nature in northern Michigan. The song and movement of birds in the nearby brush or forest canopy is less. At times not much seems to be stirring. But later, as we paddle a lake framed in lily pads, a faithful kingfisher proves us wrong as it continues about its business noisily taking flite from a nearby shore.

King birds, a constant menace to emerging dragonflies in June, are seldom seen now. Insects, particularly mosquitoes, are also not as common, and along with them the warblers that they attract.

It is a time of year that one is often treated to views of young life.

Stopping for a moment in the quiet of the season draws one into the magic of the north woods.

During the short nights of June one can often hear the haunting call of a loon. In late August, with its longer cooler nights, the voice of an owl or the howl of a coyote can be heard, but only occasional is it accompanied by a loon.

Gliding silently over “glass” we are drawn into wondering, what will be seen ahead?

Flowers appear in late summer, like the beautiful Grass of Parnassus growing at water’s edge. Further along the wooded shore, if one looks closely, Bottle Gentian may also quietly announce its presence.

It seems that the more time one spends in the woods the more one feels it’s embrace.

With the sights, sounds, and fragrance of flowers and trees, being in nature on foot or in a canoe more profoundly unites us with something greater. As we breathe deeply, and muscles work to embrace the challenge of the place, we are taken deeper into that reality. Perhaps we can only truly arrive at such a place using the resources within.

Sometimes one is sure one knows what something is. A closer examination of the below dragonflies teaches that one must look closely. They are each unique.

While hiking we’ve learned to be on the lookout for fungi. They often pop up when least expected and often cheerfully announce their presence next to the trail. Others, with distant foreboding, peer out from the darkness of the dense woods and speak of mystery.

Whether in the canoe, on the trail, or sitting quietly at one’s campsite, nature speaks through the reality of the moment. It is constantly changing, responding to light that silhouettes then illuminates, wind that sculpts the water’s blank surface or plays in leaves high overhead then leaves them still, then with little warning, the sound of distant thunder is heard, and the faint whisper of light rain grows ever louder. In those moments, if we allow it, change will occur within. If we are lucky, we’ll never be the same.

Late Summer Along The Rifle River

In northern Michigan, early September weather has a edge to it. Nights can be cold, and even when it’s sunny, mornings are slow to warm. Just a few weeks earlier, the midday sun meant a warm embrace. Now lower, it warms only one side of our face, pierces the landscape, and evokes a feeling of uneasiness and foreboding of things to come. 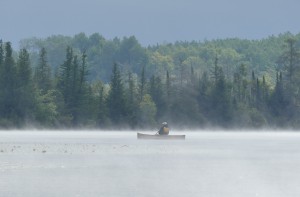 We were spending a few days at Michigan’s Rifle River Recreation Area to explore nature and do a little fishing. What birds would we see? How about wildflowers? What other wildlife would be spotted on this later in the year visit? Would any fish be caught?

Amazingly there were a good variety of late summer wildflowers to enjoy. The most striking may have been the Burr Marigold that lined a creek explored by canoe. On this year’s trip we found a wonderful natural area adjoining Au Sable Lake, a short drive outside the park boundary. The launch site is surrounded by cottages and hardly an encouragement to the explorer, but it wasn’t long before we were exploring a creek flowing from Au Sable to Little Au Sable Lake and beyond. An area with no development and unique natural beauty. 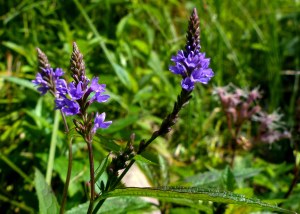 Blue Vervain, not only lovely to look at but a herb that can be used to treat depression and promote sleep, (Donna). 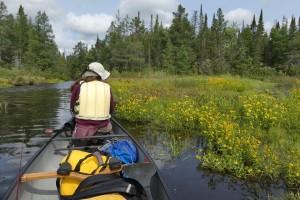 Burr Marigolds along the shoreline of Little Au Sable Lake.

The closed flower of the Bottle Gentian make entrance to feed on pollen or nectar difficult for many species of insects. Those strong enough to enter through the top of the flower include some digger and bumblebee species. The eastern carpenter bee chews a narrow slit at the base of the flower and “steals” nectar without pollinating the plant, a behavior known as nectar robbing. The holes in the petals created by this carpenter bees allow smaller insects to also access the nectar and pollen, including the honeybee, the green sweat bee and the eastern masked bee. Ref. Wikipedia, (Donna) 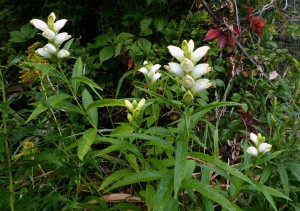 The fascinating turtlehead is a plant used in natural medicine. Traditional practices create a tonic that is claimed to be beneficial for indigestion, constipation, and stimulating the appetite. It is also an anthelmintic (de-wormer) and a salve from the leaves may relieve itching and inflammation. Ref. USFS, (Donna)

The berries of Jack in the Pulpit. 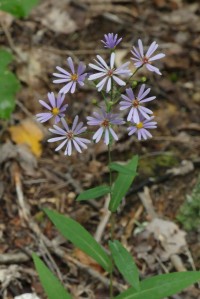 In the woods, asters add a splash of color.

A late in the season water lily showing some signs of wear, (Donna).

The seeds of the Yellow Pond Lily were frequently collected by native Americans as a nutritious raw food source. They were also used in the making of bread by grinding the seeds to create a flour, (Donna). 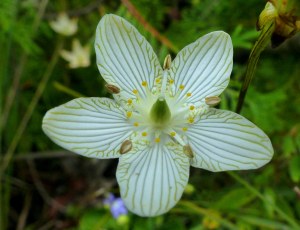 Near the end of it’s blooming season, the beautiful flower of the Grass of Parnassus, (Donna). 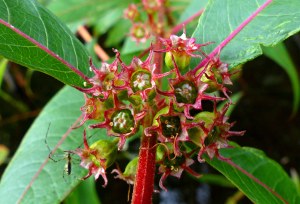 Swamp Loosestrife was found along lakes and wetlands in the park, (Donna).

Our campsite was in the woods, surrounded by maple, poplar, and birch. In their embrace the light of the late summer morning came slowly, and unlike the openness of the lakeshore nearby, evening seemed to greet us before it should.  Only occasionally would the sun find it’s way through a small isolated opening and warm my face. But as I sat there in the shade of early evening after a good day, sunlight and a soft wind played in the leaves high overhead, and in a quiet voice reached out as if to say, stay a little longer, be here with us, don’t leave.

It’s just you, the canoe, the paddle, a pole, and the fish. A beautiful aesthetic for those so inclined.

It was a great time to see fungi, albeit sometimes impossible to positively identify. Recent wet weather was undoubtedly the reason for the profusion. Fortunately, given the cooler than normal temperatures, the rain was very light and sporadic during the day which actually made for good hiking weather.

Along the trail colorful but tiny unidentified mushrooms emerge, (Donna).

Three, what we believe to be, Parasol mushrooms. 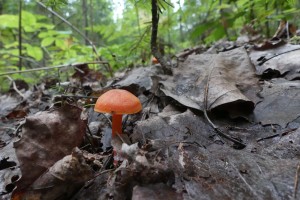 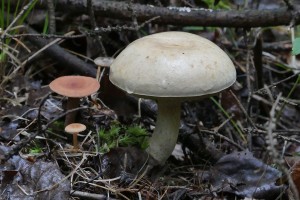 A bolete with a few friends.

A striking display of Sharp-scaly Pholiota. 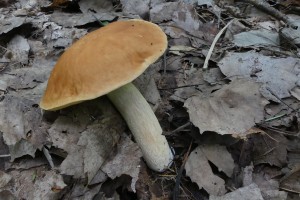 Perhaps a type of chanterelle, (Donna). 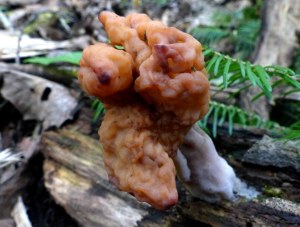 The first few days of our stay, warm sunny afternoons really brought out the insects.

Autumn Meadowhawks were common along the park roads, (Donna).

A Slender Spreadwing perches along the Rifle River, (Donna). 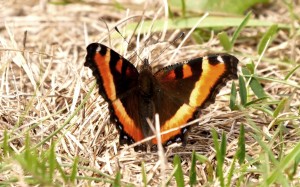 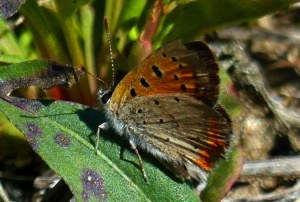 We were concerned that by early September the loons normally inhabiting the park’s lakes earlier in the year would have already headed south. With the exception of the one juvenile seen on Little Au Sable Lake, that proved to be the case. We did see kingfishers, bald eagles, and a few warblers, but the eastern kingbirds, so common around the lake in midsummer, were gone. Fishing on Devoe Lake one cloudy damp afternoon it was a real treat to see a merlin, perhaps a migrant from further north, as it flew from tree to tree noisily protested a group of harassing blue jays. A snapshot in time passing.

In the late afternoon near weeks end I found myself paddling into a stiff breeze on a wind swept lake having recently left the shelter of a lee shore at it’s far end. A contest between muscle and wind where there there could be no truce, no middle ground. I was glad only a few waves broke near the canoe as spray blew over the windward gunnel. It was such a contrast with the glass smooth surface that had greeted us in the early hours of that day. The cool quiet of the September morning and the wind and spray of the late afternoon, as the sun hovered above the horizon, was once again a summons, a reminder, to embrace the present and live life fully.

Nature Is My Therapy