Journeying On Through Florida

After leaving Lake Kissimmee State Park we headed north, ran the Orlando metro area traffic gauntlet, and arrived at Blue Springs State Park which was a new park for us. After spending a week there we would take relatively quiet back roads further north to Mike Roess State Park. The two parks couldn’t be more different. Blue Springs is a heavily used “day use” park with a small campground near Orlando while the larger Mike Roess SP was quiet and lightly used during our stay. Part of the popularity of Blue Springs can be attributed to the Manatees that inhabit the springs during the winter months and which had started to leave while we were there due to warmer weather. When one ventured away from the campground after mid-morning parking lots were pretty much full and there were always more than enough people in the park’s general use areas. However, once on the water paddling into a secluded creek or cove things changed dramatically and the area felt like wilderness.

The big find while hiking the parks limited trails was the endangered Scrub Jay which is a bird we’ve been in search of for some time without success. Habitat destruction appears to be the main reason for its decline. 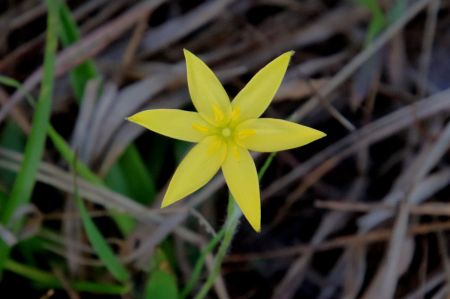 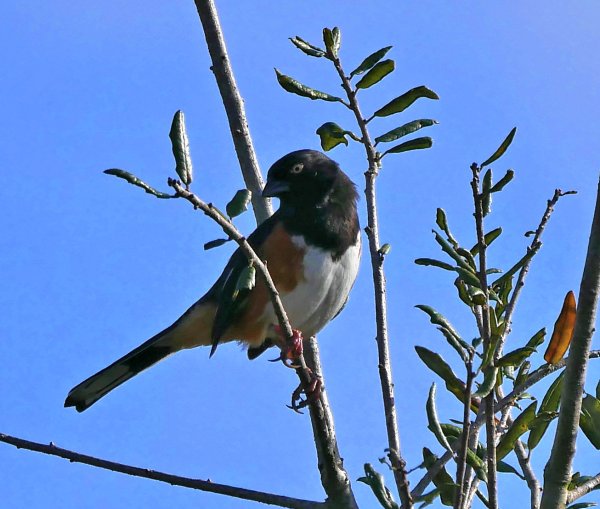 This Eastern Towhee was seen in the same scrub habitat as the jay, (Donna).

This Pileated Woodpecker was also seen along the trail as we searched for the Scrub Jays, (Donna). 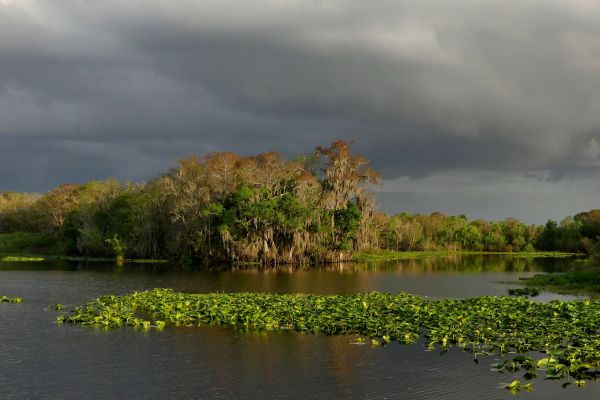 The extensive wildlife seen while canoeing was the big draw at Blue Springs SP. Our favorite paddle was the eleven mile loop that incorporated Snake Creek. The creek is a true celebration of the richness and beauty of nature.

A small alligator checks us out, (Donna).

A Great Egret watches as we pass by. 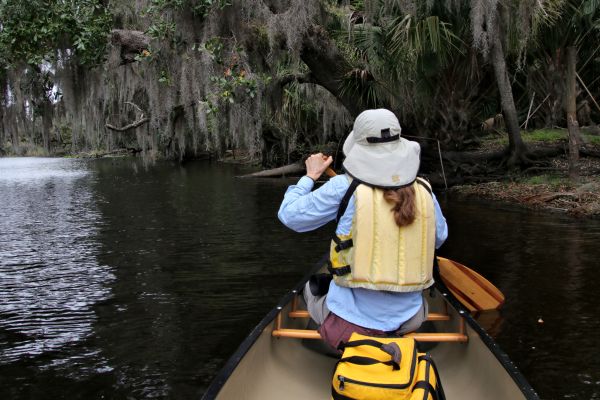 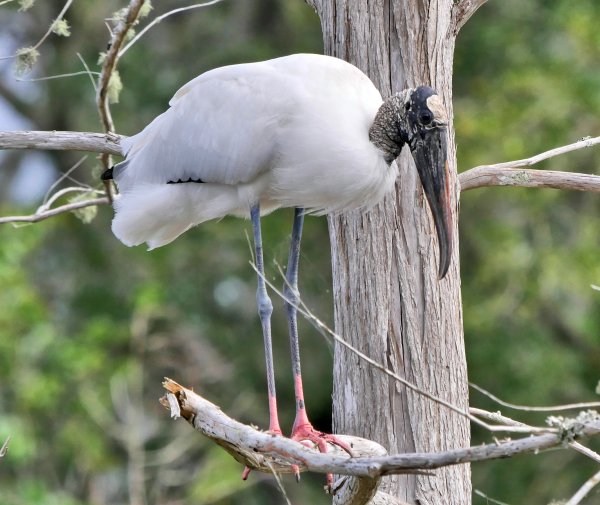 Little Blue Heron in the thick of it. 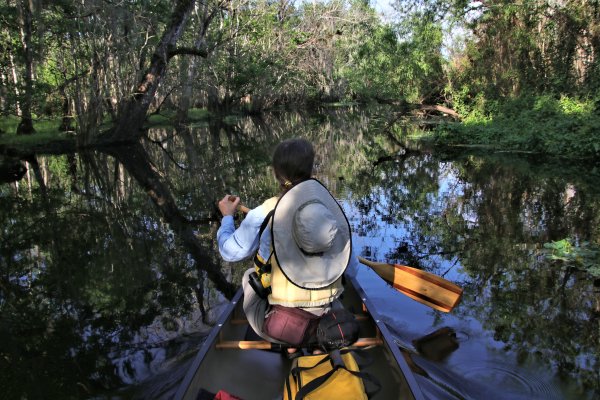 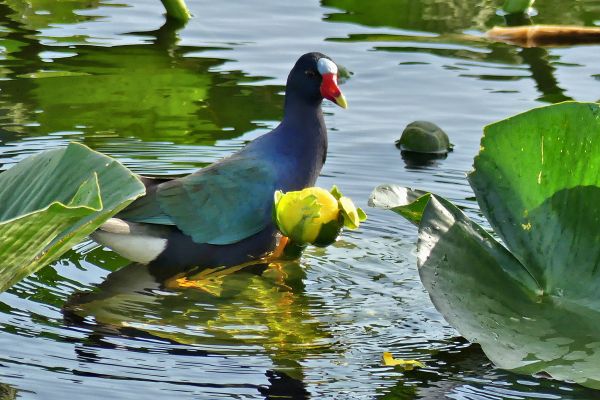 While paddling Snake Creek we came upon this mating pair at Turkeys. The male seemed not to be bothered by our presence. 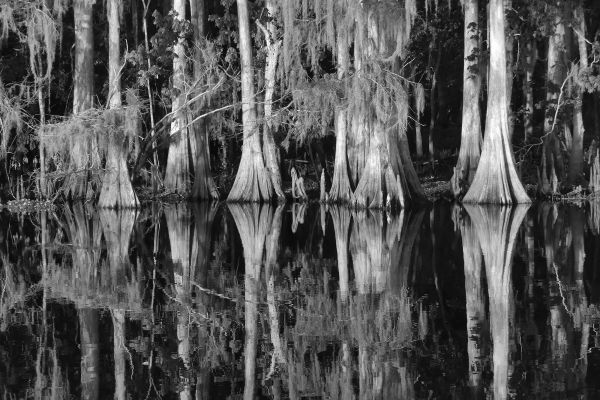 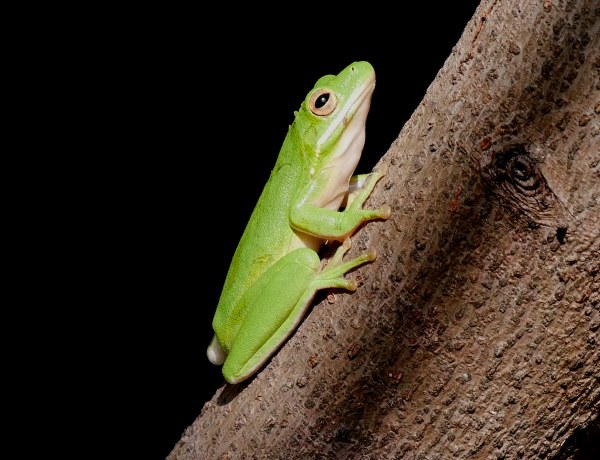 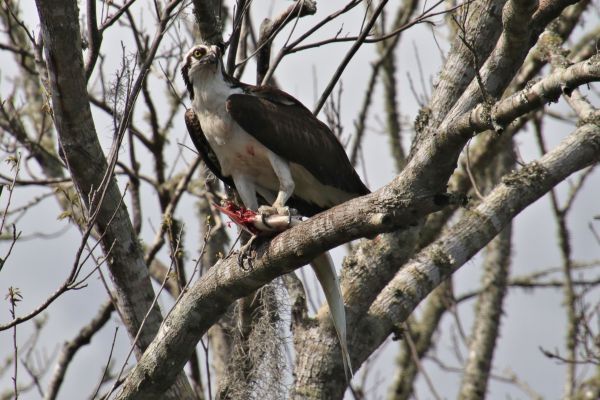 Although they are common, Anhingas always catch our eye. 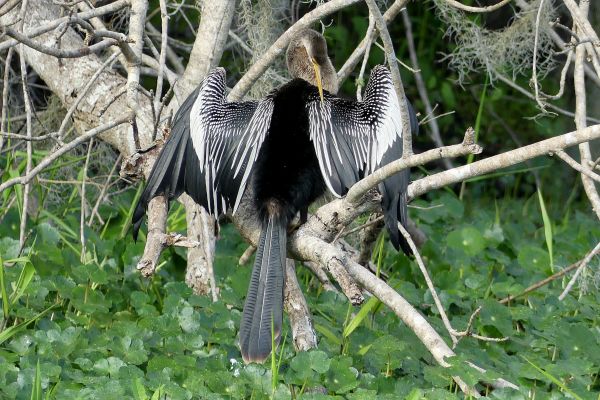 A Snowy Egret shows off its yellow feet, (Donna).

Unlike Blue Springs which provided excellent opportunities to observe wildlife from the water, hiking was the best way to do so at Mike Roess SP. A plus was that there were no crowed parking lots or large numbers of people to negotiate when one left the campground. There were areas to explore around the park’s several small lakes and along one fairly long designated hiking trail. We enjoyed the park’s quiet subtle beauty.

Walking the shoreline of the parks small lakes was an excellent way to see insects. Some of the dragonflies and damselflies seen were new to us. 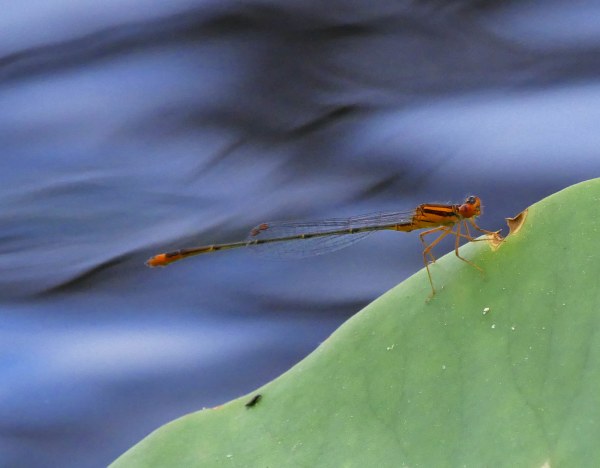 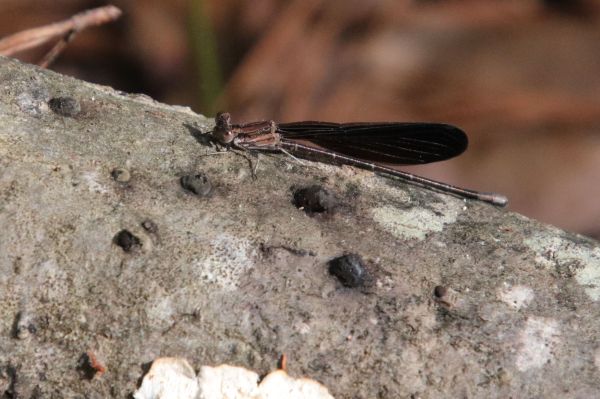 The Variable Dancer Damselfly is one we haven’t seen further north in Ohio. 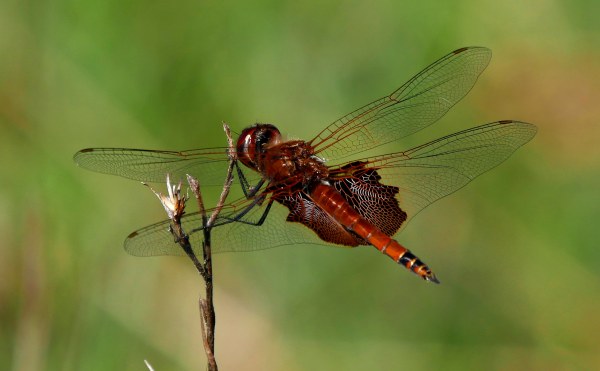 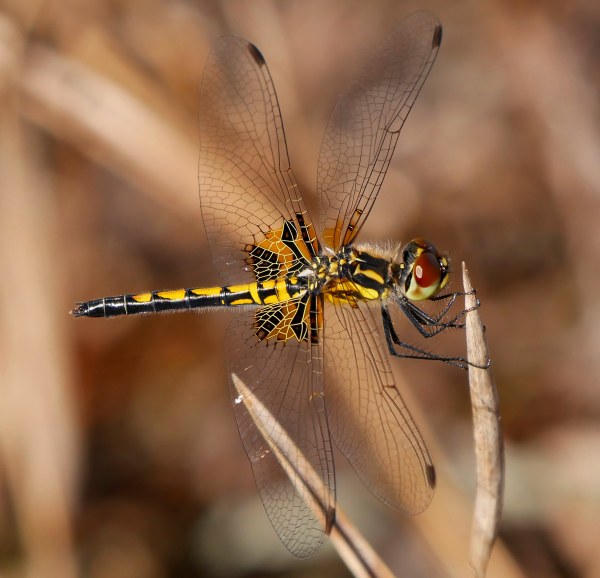 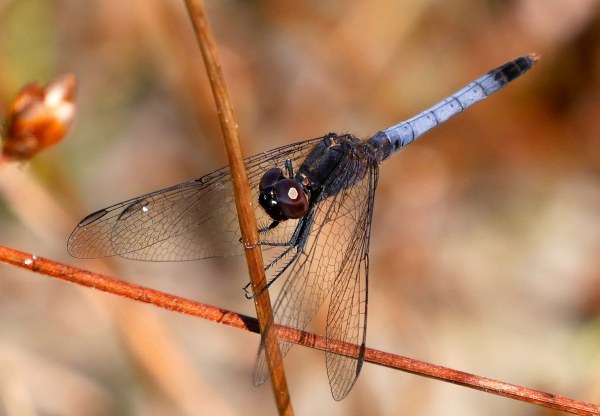 The Stripe-winged Baskettail is another dragonfly we’ve not seen further north in Ohio.

The Blue Corporal often perches on the ground, (adult male).

The Buckeye is usually seen in late summer in Ohio.

In addition to the insects there were birds to enjoy:

A Hooded Merganser and a Wood Duck pose. 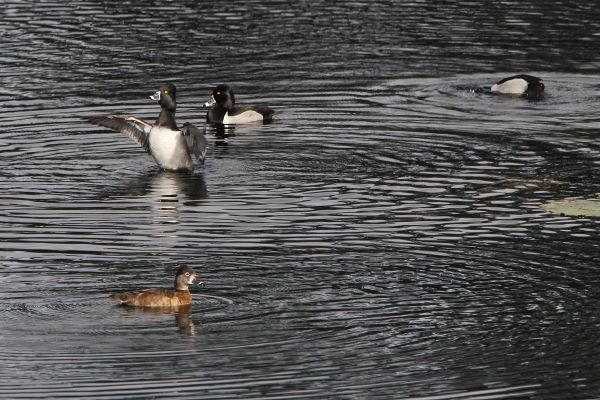 There was a sizable population of Ring-necked Ducks on the small park lakes. 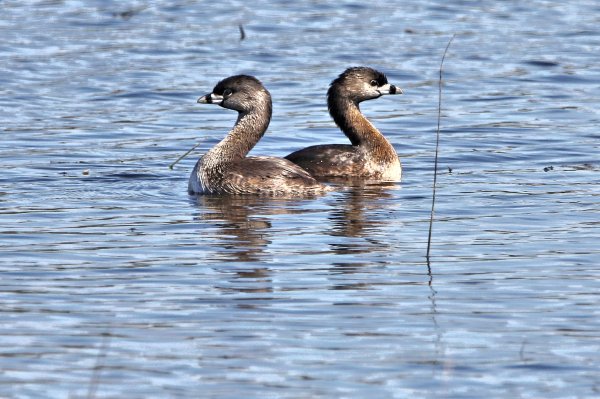 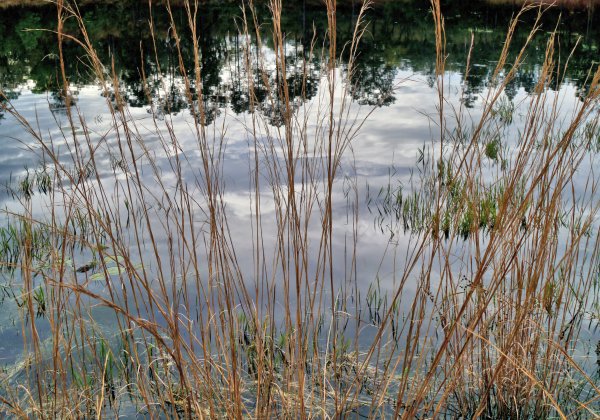 As well as other things: 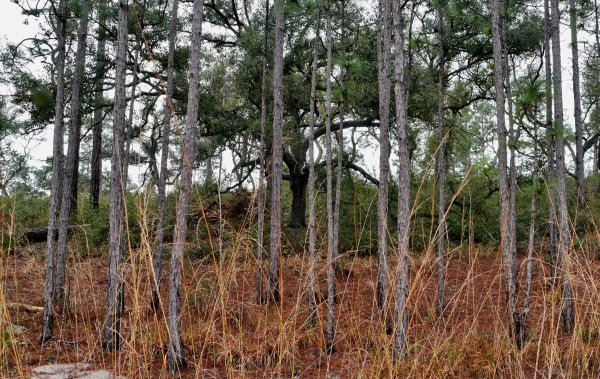 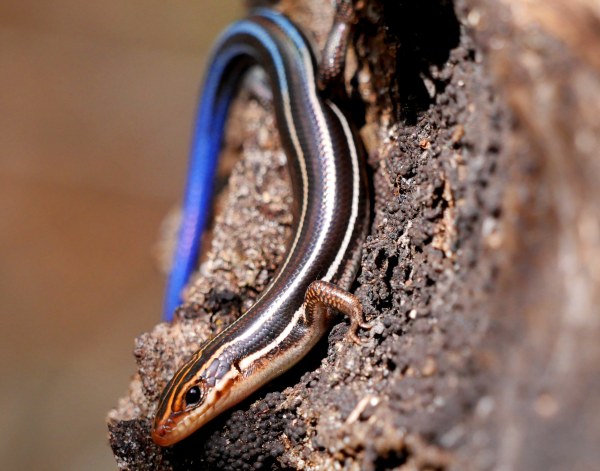 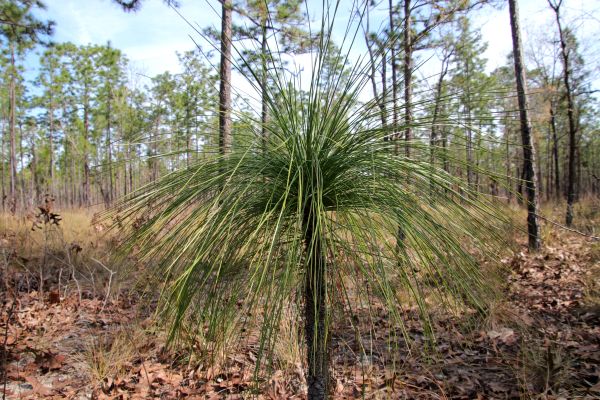