Getting Along Just Fine

At first, as we looked across the river, there appeared to be a Double-crested Cormorant hanging around with a bunch of turtles. But a closer look revealed that one turtle didn’t resemble the others. The others, Northern Map Turtles, were almost too many to count. The unique turtle was a Spiny Softshell Turtle which, while not uncommon, can’t compete with the map turtle when it comes to shear numbers in central Ohio. 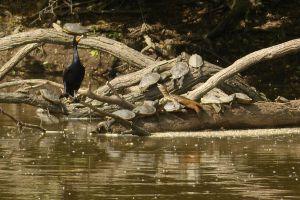 With it’s neck almost fully extended, it’s almost as though the softshell wants to be a cormorant. The cormorant and softshell made the picture interesting, but it was fascinating to see that they were getting along just fine.

As opposed to just two weeks ago, the brilliantly colored male Baltimore Orioles are much harder to spot with trees leafed out. However, one obliged by landing on the exposed branches of a nearby sycamore. 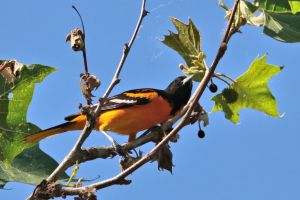 Enjoying a tasty meal in a sycamore tree.

We’ve transitioned from spring to early summer wildflowers. Two of my favorites, both anemones are Canada Anemone and Thimbleweed. The Spiderwort was photographed in bright late morning sunlight, not the best conditions, but the dark background made it work. The flower of the ninebark is amazingly beautiful considering the plant’s rather ordinary name.

Foxglove Beardtongue “grows in moist, sandy soil in full sun in meadows, prairies, fields, wood margins, open woods and along railroad tracks. Its bloom period is from late spring to early summer. The plant is known to attract butterflies and hummingbirds“. Ref: Wikipedia.

This small bee is only a little over 1/2 inch long. 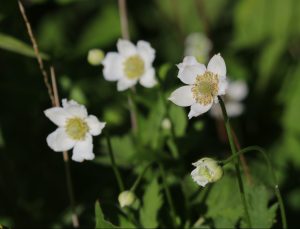 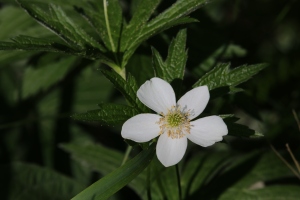 Canada Anemone, “in the past used medically by North American Indigenous peoples as an astringent and as a styptic for wounds, sores, nosebleeds, and as an eyewash. The root was respected by Plains tribes and used for many ailments”. Ref: Wikipedia 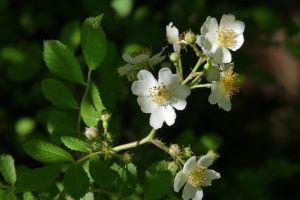 Along the reservoir small regular waves under overhanging branches create a fascinating pattern of reflections. 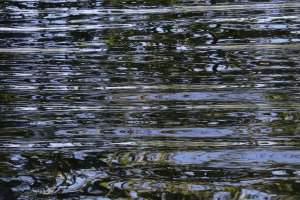 Sometimes just an inadvertent glace in a direction not planned draws one into an adventure of unexpected wonder.