One of the wetlands in Prairie Oaks Metro Park, a park located not far from our home, is easy to pass right by as you drive into the west entrance. Unlike the grand vistas of Yellowstone or the Grand Canyon that overwhelm one’s senses making it hard to look away, wetlands speak with a quiet “voice”. A voice that can only be “heard” if one gets close, stops, listens, and looks. Usually at first little will be seen, but as one waits life will slowly announce it’s presence.

Wetland, heavy vegetation around the perimeter made getting to the waters edge difficult.

It was a hot steamy early July morning that, given the recent prolonged hot spell, possessed nothing to set it apart from the day before or the day after. With the warm temperatures the goal was to see what we could see during a relatively short visit. 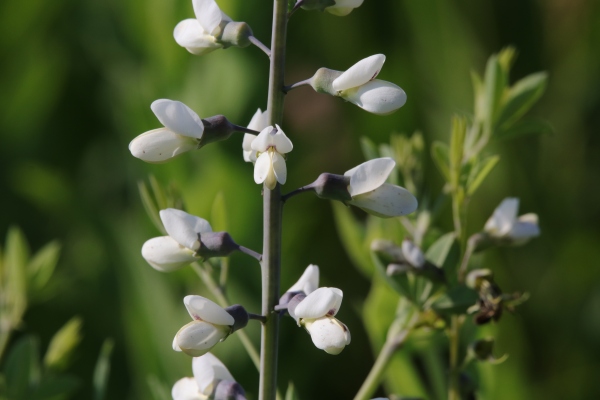 Not far from the water in an area of restored prairie, White Wild Indigo, “It’s habitats include moist to dry black soil prairies, sand prairies, thickets, edges of marshes and sandy marshes, borders of lakes, limestone glades, and dry clay hills. Bumblebees pollinate the flowers and the caterpillars of some skippers and butterflies occasionally feed on the foliage, including Wild Indigo Duskywing, Hoary Edge, Southern Dogface, and Orange Sulfur. The caterpillars of the Black-spotted Prominent moth can also be found on the foliage. The Wild Indigo Weevil and their grubs also feeds on this plant. White Wild Indigo is poisonous to mammals“. Ref: http://www.illinoiswildflowers.info

At water’s edge a very tiny Blanchard’s Cricket Frog that the casual observer could easily mistake for a grasshopper if it weren’t for the water. “Ohio Distribution: Occurs in the western 2/3 of Ohio. Appears to be more common in southwestern Ohio than in other parts of the state. Status: This species is declining rapidly across much of its entire range. In northern Ohio it appears to be less abundant today than in the past. No apparent declines in southern Ohio have been noted to this point“, Ref: OhioAmphibians.com. (Donna).

The wetland is an oasis for dragonflies. 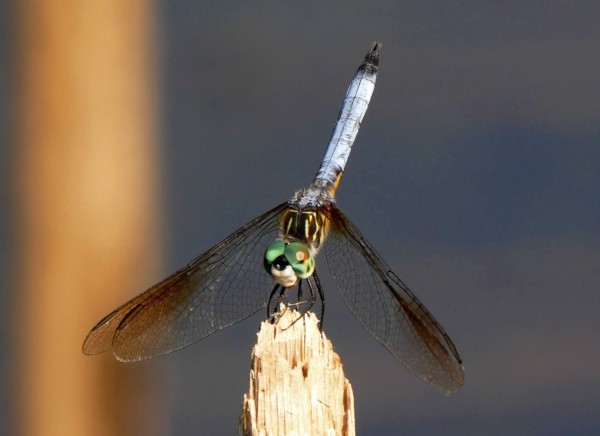 Male Blue Dasher, they are most common around shallow marshy ponds, (Donna). 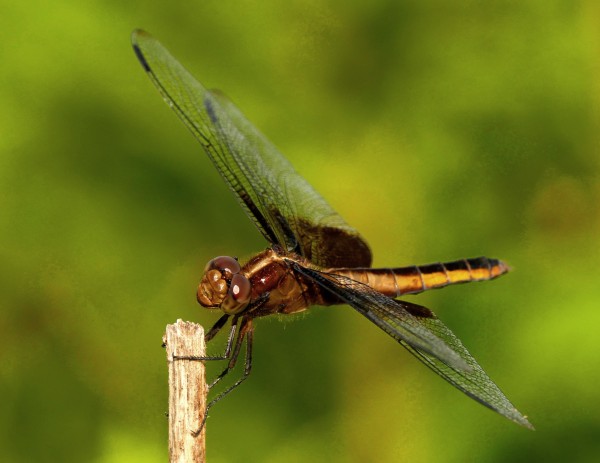 With the prolonged hot spell and little rain the wetland’s days may be numbered which may pose a challenge for this painted turtle. 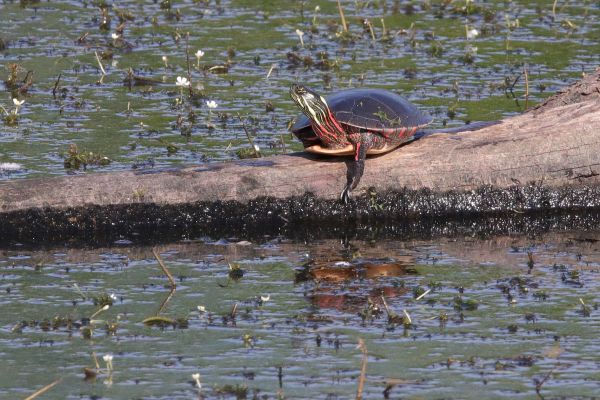 Milkweed flowers and leaves attract numerous insects not the least of witch is the Monarch Butterfly. 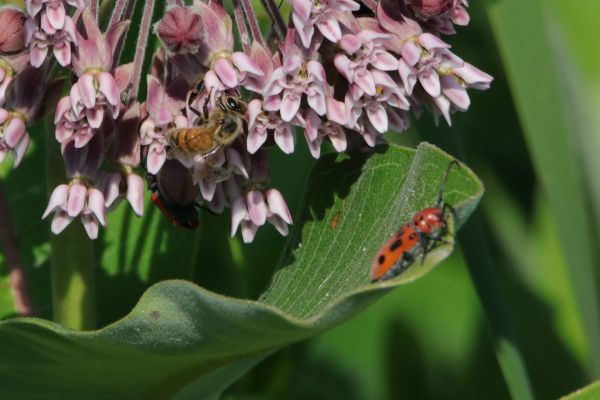 Perhaps to become a gray tree frog, a tadpole rests near the water’s surface.

A Green Heron lands in a tree overlooking the water. We wonder if he sees any tadpoles. 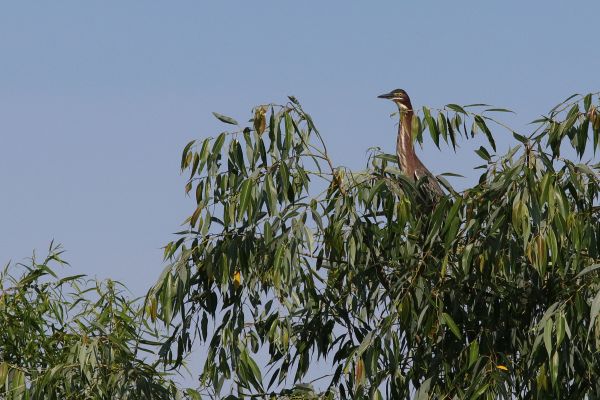 Nearby it was hard to ignore the striking color of a male American Goldfinch.

The Big Darby flows through the park not far from the wetland. 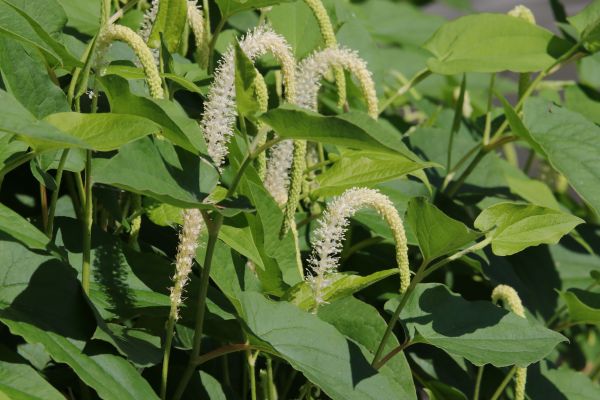 Lazard’s Tail, with it’s lovely fragrance, is currently very common along the river. 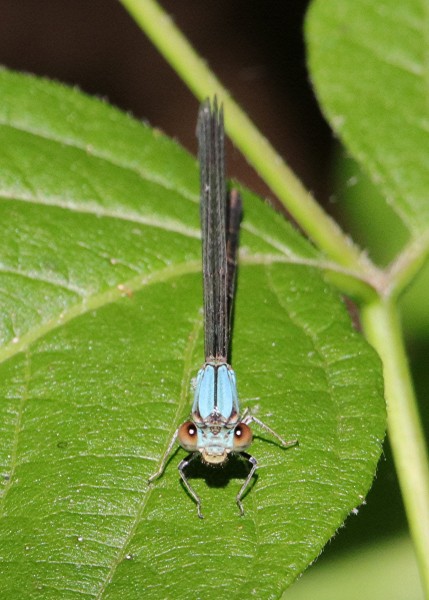 This Blue-fronted Dancer damselfly was seen along the muddy banks of the Big Darby. I’m always grateful I’m not a gnat when I see those eyes.

Water Willow, with it’s small but beautiful flower, is a very common aquatic/semi-aquatic plant in Ohio and can be found along most reservoirs and rivers. “Habitats include sandbars, gravel bars, or mud bars of rivers, low islands in rivers or ponds, shallow water or muddy banks of ponds and rivers, shallow water of rocky upland streams, shallow water or wet areas of swamps, and sandy marshes. Water Willow occurs in wetlands with either stagnant water or slow to moderate currents of water. The flowers are cross-pollinated primarily by bees. Other floral visitors include various wasps, flies, small butterflies, and skippers. These insects obtain primarily nectar from the flowers, although some bees collect pollen and some flies feed on pollen. Water Willow is one of the host plants for the caterpillars of Hydrangea sphinx moth which feed on the foliage. This plant is also a minor source of food for muskrats“. Ref: http://www.illinoiswildflowers.info 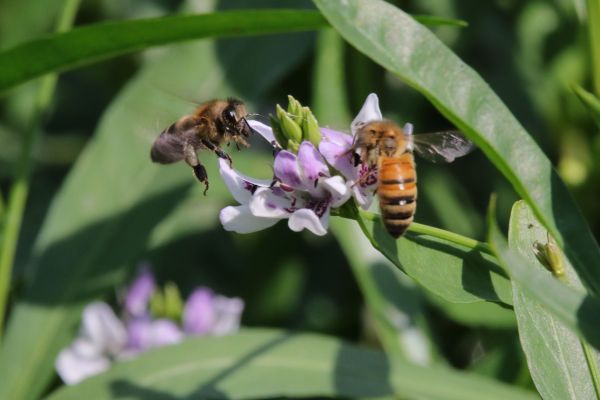 We hope you enjoyed this brief early July visit to Prairie Oaks Metro Park. The wetland left us with the heightened realization that nature contains universes within universes, all interconnected, but each with a magic and beauty all their own.

It was dark, cold, foggy, and not the kind of morning we jump out of bed to go hiking, but our visiting son from San Diego wanted to hike so who were we to argue.

Even though conditions were right to produce significant frost our initial goal was to see a few interesting birds. However, upon arrival at out hiking destination, Prairie Oaks Metro Park, the frost quickly became the main source of fascination.

Taking a closer look at nearby weeds revealed very interesting ice formations, which we originally thought was hoar-frost but after a closer examination we now believe to be rime ice.

Let me see if I was going the create something this enchanting where would I start?

It found its way unto leaves,

Frost along the Big Darby. 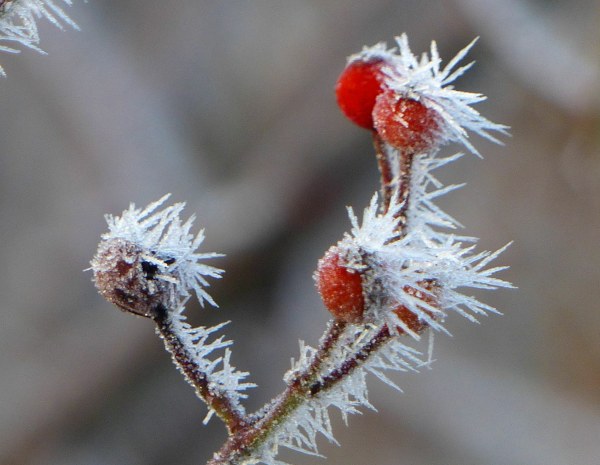 The ice wasn’t just on plants. During the night’s cold a park pond tried it’s best to freeze over.

We actually did see a few birds, including Golden-crowned Kinglets that eluded the camera’s lens, but the ice is what really stole the show.