Autumn’s Little Bit of This and That

At first I just thought it was a butterfly, catching a brightly colored object out of the corner of my eye as we finished a hike at Battelle Darby Creek Metro Park. Almost instantly my wife cried out, “look at that huge spider!” and as I spun around for a better look, the breezy day caused a large female Marbled Orbweaver to swing over my head in a return arc. It would put The Flying Wallendas to shame as it gracefully went about it’s work suspended by “high wires” that were at times invisible. By the end of a walk not many birds had been seen, certainly nothing to get real excited abound, so the spider was a special treat and served as another example in nature of what for us has become a season of a little bit of this and that. 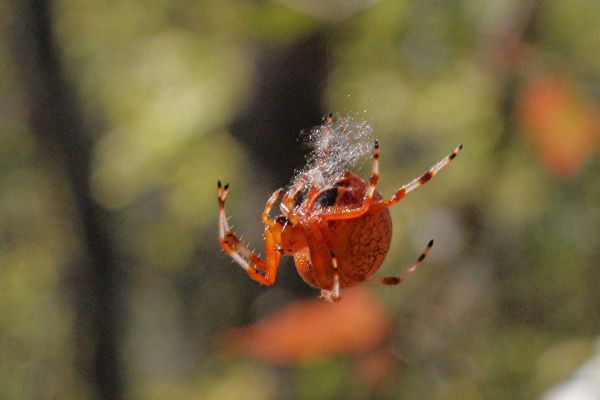 A Marbled Orbweaver gathers it’s web for reuse, about an inch an a half across, Battelle Darby Creek Metro Park.

Another look, the two black dots are it’s eyes, (Donna).

While our visit to Battelle Darby had been all about the spider a few days later and closer to home a bird we don’t see that often made an appearance.

My what white eyes you have, (Donna).

Just as we finished enjoying the White-eyed Vireo a Bald Eagle was seen circling high over head. Not an every day occurrence within the city limits of Columbus and having seen the eagle we were a lot more excited than the below picture can possibly express.

Way too high for a good pic, Griggs Park.

and there were other birds:

Insects and other things:

Bumblebee on Jerusalem Artichoke, one of the last wildflowers of fall, Griggs Park.

There continue to be sightings of Eastern Commas, Battelle Darby Creek Metro Park

The Ohio autumn landscape near our home continued to charm:

Autumn along the Scioto, Griggs Park.

Fallen leaves along the Scioto below Griggs Dam.

So letting go of expectations in recent days nature really has been a wonderful little bit of this and that. Thanks for stopping by. Should you wish, various prints from this and other posts may be purchased at Purchase a Photo. and Donna’s 2017 Birds of Griggs Park calendar is available at Calendar.

The last few days we’ve spent some time at Prairie Oaks Metro Park looking for early migrating warblers that are now making their way south through central Ohio.  We’ve heard them, even seen them, but their constant movement and the leaf cover have foiled most attempts at pictures. However, as is usually the case, there were plenty of other things that capture our imagination.  The fact is, it’s also a great time of the year for insects, and with recent rains that includes the biting kind, the price of admission.

As we walked, we couldn’t help but notice the abundance of wildflowers.

Jerusalem Artichoke, (also called sunroot, sunchoke, earth apple or topinambour), is a sunflower native to eastern North America. Cultivated widely across the temperate zone for its tuber, which is used as a root vegetable tasting something like an artichoke.

Virgin’s Bower has an attractive flower,

A wooded trail offered the opportunity to see fungi.

A type of polypore, (Donna)

Along the park’s meadows we were fortunate to see a few butterflies, Monarchs and a few other suspects.

The water’s edge of a park pond is home to frogs and turtles.

Eastern (Northern) Cricket Frog, is one of North America’s smallest vertebrates, 0.75–1.50 in long. diet is small insects, including mosquitos. They are preyed upon by birds, fish, and other frogs. To escape predators, they are capable of leaping up to 3 feet in a single jump and are excellent swimmers. (from Wikipedia)

Red-eared Slider. The box turtle shaped shell is interesting for an animal that spends much of it’s time in the water.

Along with being excellent frog and turtle habitat, it’s a great place to see dragonflies.

A pond at Prairie Oaks.

Another view of the Big Darby as it runs through Prairie Oaks Metro Park.

A few birds that managed not to elude the camera’s lens.

Red-headed Woodpecker A rare sighting but a little too far away for a great picture.

Just one more look at the river.