Early spring wildflowers in late March and early April continue to enchant us. In some wooded areas flowers almost cover the the forest floor. Spring is not new experience in our lives but every year with it comes a renewed sense of wonder. Recently, during a hike at Battelle Darby Creek Metro Park a bonus was seeing a very small butterfly and it was one we had never seen before. Adding to the joy of looking at wildflowers is the reward gained trying different angles, light, and compositions as we try to capture their unique beauty. A meditation of something fast passing.

A cardinal sings as we look for wildflowers.

In the last few days hiking the trails at Battelle Darby Creek MP, as well as a few other locations in central Ohio, our search has been rewarded.

To complete the enchantment as we made our way back to the trailhead we spotted a tiny dark and seldom seen butterfly. It was a Henry’s Elfin and a new butterfly for us. It uses redbud as a host plant and is an early spring species.

Each time we enter the spring woods it offers us something new. The season’s gift of which we never tire.

Early migrating spring warblers and other birds are moving through the area. With that in mind we’ve spent a fair amount of time in recent days looking into bushes and up into trees. Yellow-rumps have been found almost everywhere, but for yellow-throated warblers we had to look into the very top of tall sycamore trees making a good picture a challenge. Along with early warblers, many Ruby-crowned Kinglets were seen with males often displaying their ruby crown.

As if to throw out the welcome mat, spring wildflowers, including Large-flowered trillium compliment the beauty of migrating birds.

While trying to find warblers along Griggs Reservoir we were distracted by the behavior of other birds. In the last few days that has included a crow, eastern bluebirds and red-winged blackbirds.

Along the reservoir a crow carries off a scavenged shad in it’s beak, flying overhead it lands in a nearby tree and proceeds to dine, (Donna) 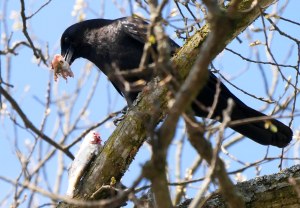 We were not sure whether this was a normal practice but the head was soon separated from the body, (Donna). 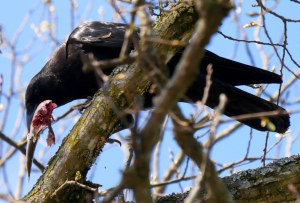 Then on to the main course, (Donna). 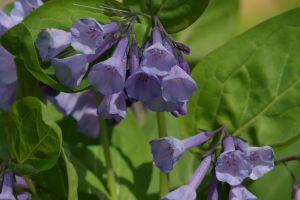 The more common Virginia Bluebells add their color to the welcome mat.

Eastern Bluebird harmony, then not.

As a male and female bluebird were busy with “homemaking” tasks I took a few shots:

Together with nest hole visible.

Leaving the happy couple I walked to our nearby car as my wife trailed behind. Putting my gear away I looked back to see my wife with her camera pointed at the ground. Apparently another female had decided to challenge the status quo resulting in an epic battle which went way beyond mere posturing. We have heard that competition during mating is not restricted to males and that often rivalry’s between females can be even more spirited. What we witnessed certainly bore that out. 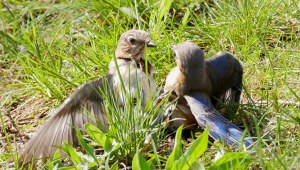 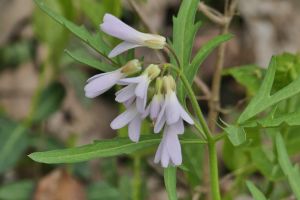 As we tried to listen for the faint treetop call of a yellow-throated warbler, a red-winged blackbird made it’s presence known: 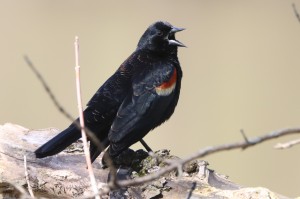 Not far away a blue jay was enjoying the hazy morning sun.

Chickadees seemed too busy to notice anything but the task at hand.

Oh yes, we did manage to see a few warblers and even kinglets but their behavior wasn’t nearly as entertaining as that of some of the park’s normal residents.

Male Yellow-rumped Warbler. Right now the yellow-rumps are by far the most common. 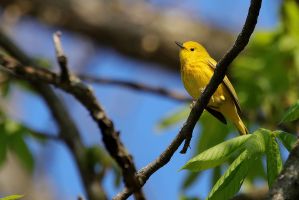 Male Palm Warbler. A bird that’s quite common in Florida in the winter.

Male Black-throated Green Warbler with what appears to be nesting material. A bit unusual as this bird is not indicated to breed in central Ohio. 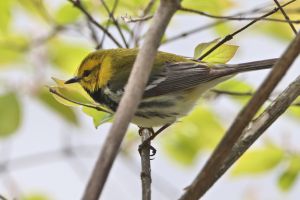 Ruby-crowned Kinglets seem to be everywhere.

As of the date of this post there have also been reports of Northern-Parula, Pine, and Yellow Warblers all of which we have yet to see. In the coming weeks, as the spring migration continues and before the trees fully leaf out and obscure the view, there should be no shortage of birds to entertain.

In recent days bird activity betrays the fact that from a distance the landscape is still more reminiscent of a snowless winter day than spring. Hearing but not seeing any first of the season migrating warblers we’ve nonetheless been entertained by other birds engaged in spring preparations or just passing through.

It’s not just the sight and sound of birds, but the call of spring peepers in low lying flooded areas, that bring music to the day. Much easier to see but not nearly as vocal, bullfrogs are also present. Under budding bare branches in wooded areas a closer look around our feet reveals spring wildflowers sparkling in last year’s leaf litter. 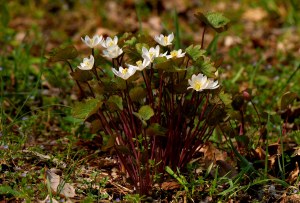 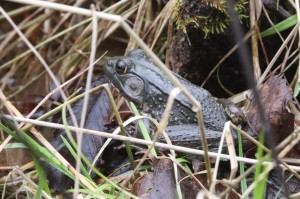 The very small flowers of Harbinger of Spring, (Donna)

Recently, after arriving at a local park, a magic moment occurred when a large group of White Pelicans were spotted overhead on their way north. Something we don’t recall ever seeing in central Ohio before. By the time cameras left their bags, etc., there was time for just one shot before the birds were obscured by nearby trees. 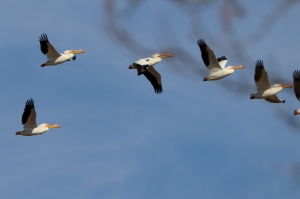 The chocolate milk color of water in most central Ohio reservoirs says spring and offers proof of recent heavy rains and runoff from yet to be planted farm fields. However, yesterday we ignored the water’s uninviting color, given that it was an otherwise a perfect day, and launched the canoe to go exploring. As we headed out, numerous Great Blue Herons, Great Egrets, and Bonaparte’s Gulls continued to feed on small dead or dying shad (as they have for the last couple of weeks), while turtles took advantage of the warm sun.

Almost ready to launch on Griggs Reservoir in our fast 18ft Sawyer Cruiser.

Many trees are starting to leaf out. There were very few boats on the reservoir for a Saturday. 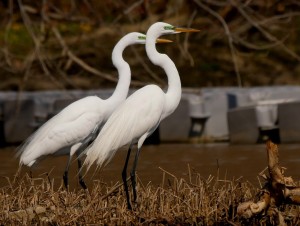 This large beaver lodge has been at the north end of Griggs Reservoir for years.

A lighter Red Eared Slider and a Map Turtle.

My wife had numerous opportunities to photograph Wood Ducks during our paddle. This was one of her best shots.

So hopefully warbler spring migrant pictures will grace the pages of a blog in the near future but in the mean time we’ll continue to celebrate all of the other things seen.

Stay safe and as always, thanks for stopping by

While working on a blog post pertaining to time spent in Florida earlier this year I was interrupted. However, unlike many interruptions this one was good. Spring wasn’t just knocking, it was banging on the door, calling us to come out and play. In just the last few days nature has exploded in central Ohio making it hard for my wife and I to contain our enthusiasm. Hopefully this post will convey just a little bit of the excitement.

One of the first clues that things were changing more rapidly were the wildflowers. 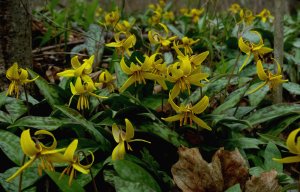 Emerging Buckeye leaves, not a flower but beautiful in their own way.

Then there were the birds, all of which seemed very busy. 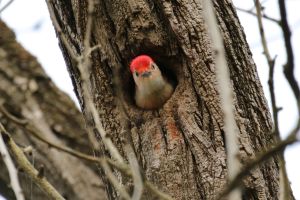 From it’s nesting cavity a Red-bellied Woodpecker checks us out.

A Canada Goose on it’s nest at water’s edge. Hopefully there will be no heavy rains in the near future.

An argumentative pair of Blue Jays announce their presence. Could they be discussing nest location?

This Canada Goose was trying a different menu item. Something we’ve never seen before.

Other birds were just enjoying the warmer weather.

A Tufted-titmouse makes itself know with a voice much bigger than the bird.

A common but hard to photograph Carolina Chickadee is nice enough to pose. 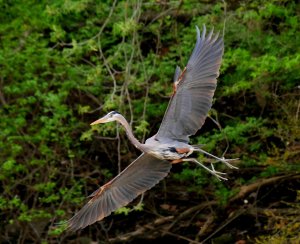 The Great Egrets in their breeding plumage continued to enchant us. 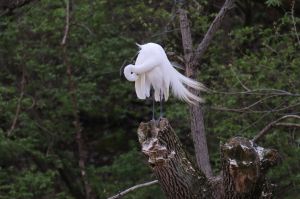 But the days real excitement was generated when we spotted a newly arrived spring migrant.

This curious Yellow-throated Warbler flew down to see what I was up to.

Too cute for just one pic.

And perhaps one more.

As if the wildflowers and birds weren’t enough, more turtles than we’ve ever seen on one log decided to get into the act.

Turtles along the Scioto River, How many do you see?

We hope our enthusiasm rubs off on our readers and everyone gets out to witness springs transformation in their neighborhood.

Walking in the freshness of an early spring morning

along a path lined with trees just clothed in translucent green

with the sights, sounds, and smells of nature

We had been seeing early spring wildflowers closer to home so we though a trip to Clifton Gorge, an area known for it’s unspoiled beauty as well as wildflowers, to see what might be popping up. Driving to our destination we tempered our enthusiasm by agreeing that sometimes it’s just as important to take note of what one doesn’t see as well as what one does. and besides there are few places in Ohio that are better to take a hike.

We didn’t have to walk far before we realized we wouldn’t be disappointed. True, some flowers still had a way to go: 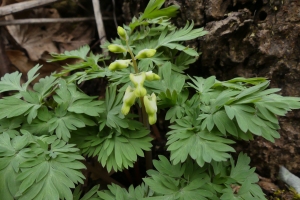 Dutchman’s Breeches a few days away from being in full bloom.

Actually, this Bloodroot may have opened up later in the day.

Toadshade Trillium’s leaves are beautiful. In this case, the flower, which never really opens up, is a few days away from blooming.

With dryer weather later in the year, this small waterfall will be no more.

But other flowers were in full bloom.

Hepatica getting ready to open, (Donna). There are 39 native Ohio species.

Along with the Snow Trillium and Harbinger of Spring, Hepatica is one of the earliest Ohio wildflowers to bloom, (Donna).

Bloodroot, trying to catch up. 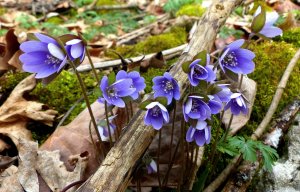 This Blue Hepatica was stunning, (Donna).

A few Snow Trillium were still in bloom. 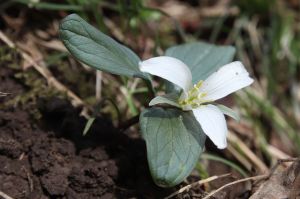 Seeming to be a bit early, Wild Ginger was also found.

Wild Ginger has a flower but you need to look closely, (Donna).

Perhaps the most exciting find, Scarlet Cup Fungi, was no a flower at all. It occurs from late winter to early spring and was spotted it in several locations

A Scarlet Cup group perhaps a bit past their prime.

This one looked as though it had emerged more recently and had lovely color and shape.

We hope to get back to Clifton Gorge in a couple of weeks to see how things have changed and very few things speak of change as clearly as spring.