On a recent hike on a rather cold but clear autumn morning a friend exclaimed how good it was to be outdoors on such a beautiful day, and that at this point in her life she is really trying to embrace autumn. She related that she was hoping to shed the, all too easy to acquire, mindset that autumn is just that beautiful but fleeting season between summer and winter. She was going to look closer, be in the moment, and appreciate. An admirable goal any time of the year, but particularly in the ever shorter days of early October when it all seems to go by quickly.

The morning sun accentuates the color across the reservoir, Griggs Reservoir Park (GRP).

She talked about sketching, and how looking at a flower or other object in the effort to draw it really enhanced her seeing and appreciating. I couldn’t help but think of it as a meditation. Certainly photographs and words can also lead to a more intimate relationship with nature as we compose a picture or reflect on things not capable of being being expressed in a picture.

Fall warblers are sneaky. With the exception of the Yellow-rumped Warbler that stick around to enjoy poison ivy berries, warblers move through central Ohio on their way south quickly and quietly without the spring’s distinctive calls. Along with other birds that don’t have to depend on insects for food, cardinals, eastern bluebirds, and woodpeckers, some of which may be from further north, hang around all winter. Interestingly a fair number of Great Egrets, which don’t typically winter in Ohio, are still in the area. Some Great Blue Herons manage to make a living here throughout the winter but their smaller cousin the Green Heron has already left. 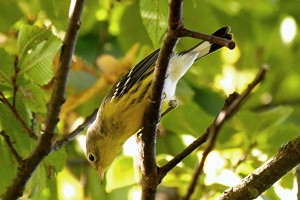 For obvious reasons this Eastern Phoebe won’t be in the area much longer (GRP), (Donna).

A recent arrival from the north, revving up it’s motor, this Ruby-crowned Kinglet left the branch bare a fraction of a second later, O’Shaughnessy NP.

Some days if it wasn’t for the cardinals things would be pretty dull (GRP) (Donna). 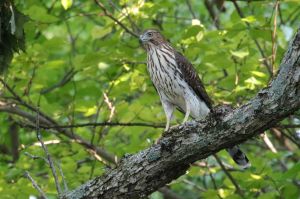 A Coopers Hawk waits patently for a meal. It’s a year round resident (GRP).

The White-throated Sparrow is a migrant from the north. Some will spend the winter in central Ohio, Wahkeeva NP.

Autumn along the reservoir (GRP).

The flurry of insect activity has slowed down considerably over what it was just two weeks ago. Butterflies, and especially bees, had been incredibly active during the last warm days before the occurrence of a few cold nights where the temperature hung just above freezing. 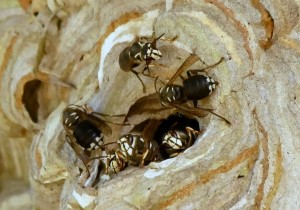 Traffic jam at the entrance to the nest, (Donna) 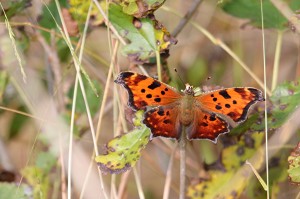 The Common Checkered Skipper is usually seen in late summer and fall (GRP).

Chipmunks were also in on the activity. 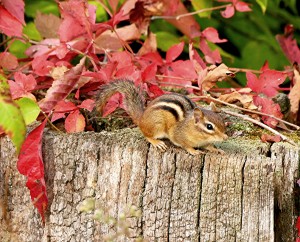 I finish writing this with memories of the smell and color of the autumn woods graced by the light of the seasons low laying sun and transformed into a branched “stained glass” cathedral of yellow and gold. Outside under gray 50 F skies a light rain is falling, perhaps nature’s way of saying in a quiet voice, “Pause, give thanks, for those warm, sunny, autumn days, and for all things with which you have been blessed”.