It’s always fun when one can combine two loves. In this case canoeing and birds. My wife and I are blessed with a fondness for the active engagement of moving under our own power, be it it hiking, cycling, or paddling. It turns out that this type of quiet activity enhances the chance of seeing birds and other wildlife.

The last week found us at the north end of Alum Creek Reservoir twice. The reservoir comprises a large portion of Alum Creek State Park. The first of two fairly long paddles was to see what birds we might find and the second was to get a better look at the red-headed Woodpeckers seen a few days before. Red-headed Woodpeckers are always a treat to set because their numbers have decreased significantly in recent years.

According to Cornell’s All About Birds: “Red-headed Woodpeckers declined by over 2% per year from 1966 to 2014, resulting in a cumulative decline of 70%, according to the North American Breeding Bird Survey. Partners in Flight estimates a global breeding population of 1.2 million, with 99% spending part of the year in the U.S., and 1% in Canada. The species is at risk of becoming threatened or endangered without conservation action. These woodpeckers were common to abundant in the nineteenth century, probably because the continent had more mature forests with nut crops and dead trees. They were so common that orchard owners and farmers used to pay a bounty for them, and in 1840 Audubon reported that 100 were shot from a single cherry tree in one day. In the early 1900s, Red-headed Woodpeckers followed crops of beech nuts in northern beech forests that are much less extensive today. At the same time, the great chestnut blight killed virtually all American chestnut trees and removed another abundant food source. Red-headed Woodpeckers may now be more attuned to acorn abundance than to beech nuts. After the loss of nut-producing trees, perhaps the biggest factor limiting Red-headed Woodpeckers is the availability of dead trees in their open-forest habitats”. 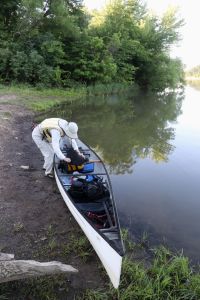 Loading camera equipment into our fast but stable 18 foot Sawyer canoe. Unless you are near shore. it’s hard to appreciate this boat’s speed when you really want to get somewhere, as it leaves virtually no disturbance in the water. 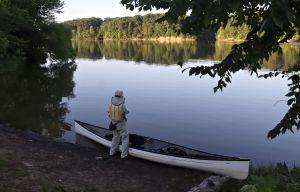 Getting ready to depart on a very quiet morning.

Not our primary objective but it wasn’t long before Prothonotary Warblers were spotted at waters edge. 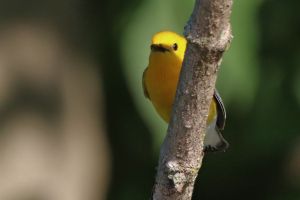 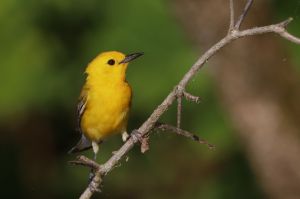 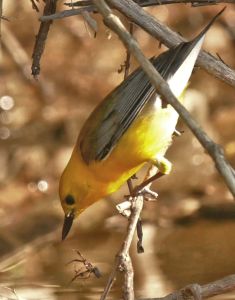 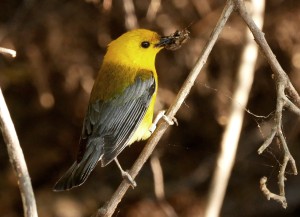 Not a good day for the spider, (Donna).

Shortly after our encounter with the Prothonotary Warblers we spotted an Eastern Kingbird on it’s nest on a branch overhanging the water. 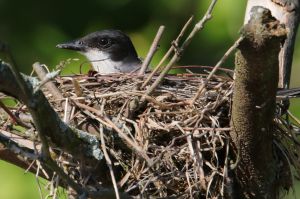 Eastern Kingbirds are common along Ohio reservoirs in the summer.

Along with Wood Ducks, Osprey and one Bald Eagle and an Indigo Bunting, there were many Great Blue Heron sightings. However, in what was somewhat of a surprise, no Green Herons were seen. 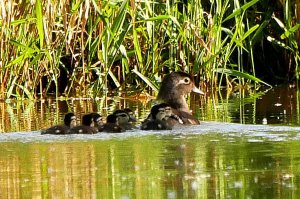 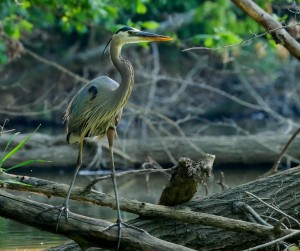 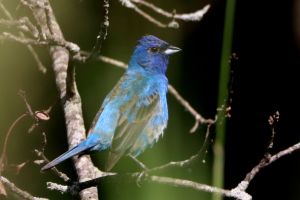 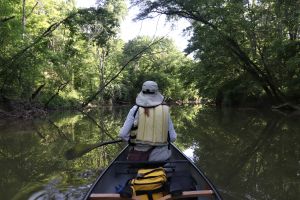 Our first look in the area where we had seen the Red-headed Woodpeckers an few days before didn’t turn up much, so we headed further up Alum Creek to see what else might be found.

On the return leg we stopped at what appeared to be a Red-headed Woodpecker “hotspot” and were rewarded with a number of sightings. 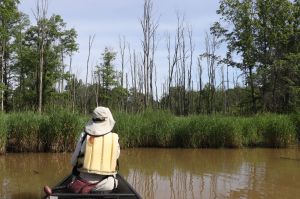 The habitat at the north end of the reservoir.

A juvenile was the first to permit photographs: 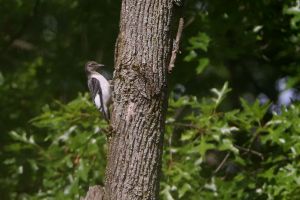 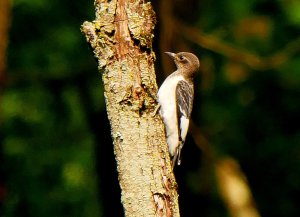 .   .   .  and then after some repositioning and jockeying the canoe looking for better views and better light we were able to get some shots of an adult! 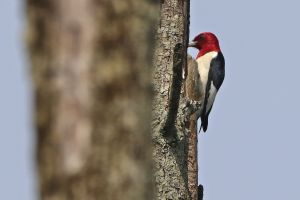 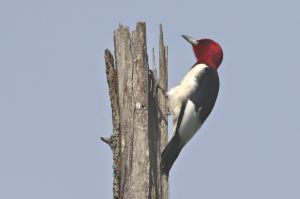 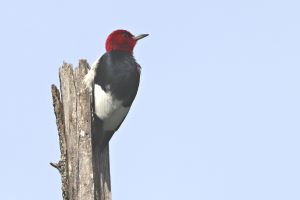 We’ve paddled to the north end of Alum Creek Reservoir many times over the years and this was the first time we’ve seen Red-headed Woodpeckers in these numbers, perhaps three adult pairs. Was our timing just bad in the past, were we just not looking for them so they remained unseen, or were they not there, at least in the quantities observed? We’re are not sure but hopefully future trips will answer the question. Meanwhile we will rejoice in having seen them and may even pay them another visit before the year is over.

7 Comments on “Canoeing And Red-headed Woodpeckers”