What Are They Eating?

We love watching the behavior of the birds at our front yard feeders. Each species seems to have a slightly different style for relieving a feeder of it’s contents. Chickadees fly off to a nearby branch with just one seed, then, while holding it between feet and branch, devour it before returning for another. It would seem that this method expends more energy than is consumed but apparently not. House sparrows are at the other extreme. They make expectant squirrels on the ground below happy as they gorge themselves, scattering seeds everywhere, and bickering with each other the whole time. However, even though we enjoy the feeders, we have found the foraging behavior of birds in their natural habitats to be the most fascinating.

Observers of golden-crowned kinglets know they are constantly in motion. They flutter from branch to branch, sometimes landing sometimes not, grabbing food items that are often too small to see. So on a winter day with temperatures well below freezing what are they finding on the many small nondescript branches, some less than a quarter inch in diameter? If they were probing crevasses in gnarly tree bark it might be easier to guess. Cornell Lab, All About Birds says; “In winter the kinglets also eat small amounts of seeds and may forage in brush piles and under-story trees. .   .   .   Golden-crowned Kinglets forage in similar parts of a tree as Ruby-crowned Kinglets and chickadees.” Since, even when studied with the binoculars, the branches appeared to contain no seeds or dormant insects, the menu items were only obvious to them. A mystery not completely solved. 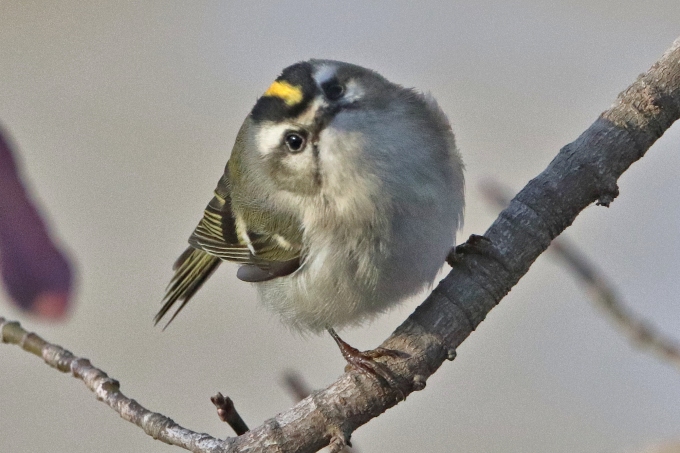 Later the same day, we watch a downy woodpecker work over a small branch. In this case it was a little easier to see what was going on but in some ways no less mysterious. An obvious hole had been made in the branch but certainly no insects would be living below it’s very thin bark. Was the bird after tree sap? Again referring to All About Birds; “Downy Woodpeckers eat mainly insects, including beetle larvae that live inside wood or tree bark as well as ants and caterpillars. They eat pest insects including corn earworm, tent caterpillars, bark beetles, and apple borers. About a quarter of their diet consists of plant material, particularly berries, acorns, and grains.”  Since tree sap wasn’t mentioned we’ll have to consider it an unsubstantiated best guess.

A few days later, it was dull and drab but warmer. Perhaps warm enough to wake dormant insects. Along the rain swollen river bluebirds were perched on the low branches of a sycamore looking for any movement on the ground or in the air. They occasionally swooped to the ground and grabbed something (an insect or a seed?) and then returned to their perch. In the mystery, what ever they found was good enough because tomorrow we will see them again.

On a long urban hike to work off the transgressions of the holidays, the morning was dark, cold, and wet, with light rain trying to turn to snow, and wind periodically gusting to remind one that it was colder than originally thought. Heading for the park through quiet residential streets, I wondered if any of the small friends that often inhabit the trees and brush along the river, would be there to greet me. 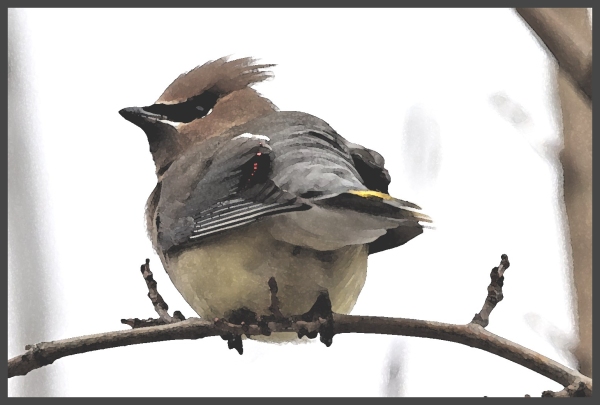 Perhaps it was the chill and dreariness of the day, kept at bay by the pace of my stride, until, pausing for a time, I was warmed by the sight of such seemingly delicate creatures “cheerfully” going about their business. I do not know for sure. But in the contrast of the moment I was captured by their magic. A play of pure joy and color acted out against the seasons dull colors of gray and brown on a stage perfectly set.