A Journey Through Early Autumn

Perhaps it’s the flowers or the number of sunny blue sky days that have populated the last few weeks, but so far our journey through early autumn, perhaps a bit warmer than one would expect, has been a wonderful celebration of the time of year.

Blue Jays, along with migrants from the north adding to the local population, are commonly heard engaged in their noisy banter as we explore local parks.

By late morning and early afternoon there are always butterflies and dragonflies keeping us company. It has been a banner year in central Ohio for the Common Buckeye. It’s difficult to remember a year when we’ve seen so many. Several years ago it was late September before we saw our first one. At the other extreme we’re not sure we’ve seen even one Morning Cloak this year.  Could the same weather patterns or events be responsible for both of these outcomes? One can only wonder. One interesting bit of information we recently uncovered is that, depending on the severity of the weather, Buckeyes can successfully overwinter in Ohio. This could explain this year’s early sightings.

The underside of the wings, (Donna). Griggs Reservoir Park. 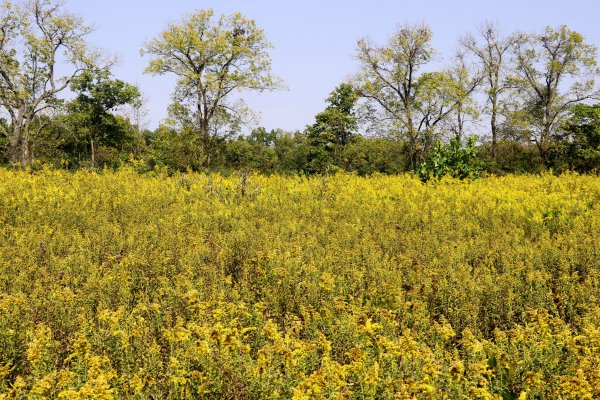 With fields of golden rod in bloom there’s no question about the time of year, Battelle Darby Creek Metro Park.

A few days back, while I was fishing, my wife was excited to find a Dainty Sulfur in Griggs Reservoir Park. To make matters worse not only did I miss the butterfly I didn’t catch any fish.

Dainty Sulfur, (Donna). The last time this butterfly was seen in central Ohio in observable numbers was 2012. Griggs Reservoir Park.

Little Yellow butterflies, while not as uncommon, were seen in another area park. We usually observe this butterfly in Florida during the winter.

Other butterflies were also present: 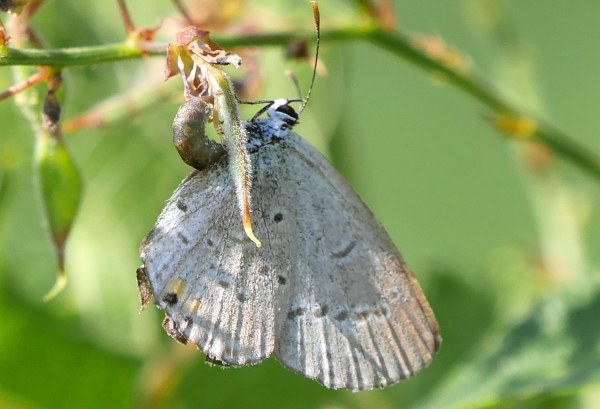 This Viceroy seen at Blues Creek Park can be easily mistaken for a Monarch but it is slightly smaller, a faster flyer, and has similar but different markings on it’s wings.

In recent days, no doubt due to the extended warm weather, we’ve noticed more dragonfly activity.  The following images are of some of the more noteworthy ones seen. The Wandering Glider is not uncommon but hardly ever lands so it was a real treat to get a picture. This aptly named carnivorous insect is the widest ranging dragonfly and can be found on every continent except Antarctica.

A Illinois River Cruiser perches not far from the river in Battelle Darby Creek Metro Park. We believe this is a first sighting for us.

This beautiful Blue-faced Meadowhawk was also a new dragonfly for us. This one was seen not far from a wetland in Blues Creek Park.

Prairie Dock is a member of the aster family and can grow up to eight feet tall, Battelle Darby Creek Metro Park.

The small furry creatures all seemed busy, usually with a nut in their mouth, and were hard not to notice. 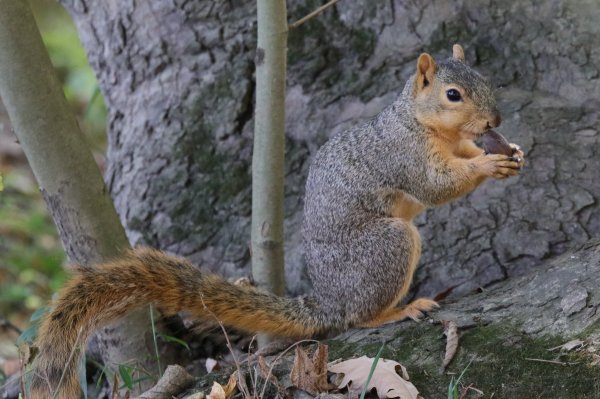 The autumn nights, now longer than the days, usher us too quickly through the season. In keeping with this journey the next post will be about fall warblers as they make their way through central Ohio. Thanks for stopping by.

← What Birds Do
Neighborhood Migrants →

2 Comments on “A Journey Through Early Autumn”