Exploring the world of insects is an excellent example of how digital photography has opened a door into a world most folks don’t give much thought to much less appreciate. A passion for bugs may start out innocently enough when one decides to photograph a flower and finds that it’s occupied by many creatures not noticed before. A closer look reveals some to be beautiful and fascinating in their own right and others downright scary. This may prompt one to make an effort to identify the bug just photographed which in turn often leads to an awareness of how much there is yet to learn about this small world.

Fortunately it doesn’t take an expensive camera to get a reasonable picture of a insect the size of the common house fly. We’re not talking macro-photography here, where one focuses on the dragonfly’s eye, but instead about a picture that will allow you to identify the insect and be good enough to share on social media. Our favorite of the small sensor “bridge cameras” is the Panasonic Lumix FZ200 or 300. With their fast lens and close focus capability they are a great all round camera for anyone starting out in nature photography. When one moves up from there to larger APS-C sensor DSLR’s you are looking at more money and bulk which may limit their appeal on long hikes. In the world of DSLR’s just about any lens similar to the Canon 18-135 mm will allow you to focus close enough to get a reasonably good shot. Longer lenses such as the Tamron 100-400 mm (more money still) will allow you to focus on subjects that won’t let you get close enough with a shorter lens. With it’s close focus capability perhaps the best all round bird/bug nature camera setup I’ve seen is the micro four thirds Panasonic G7 with the 100-400 mm Panasonic/Leica lens that my wife uses. It employs an excellent but smaller sensor than my Canon APS-C which is part of the reason for it’s admirable close focus performance. That being said I’m sure there are excellent camera setups that I’ve not had experience with.

Unless stated otherwise the below pictures have all been taken close to home at Griggs Reservoir Park so the adventure doesn’t necessarily mean hours of driving to some exotic location. Almost all insect images have been significantly cropped.

An nice illustration of the difference in size between a sweat bee and bumble bee, (Donna). 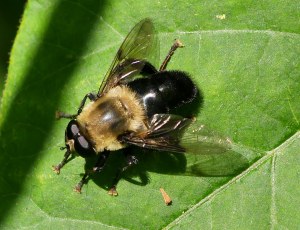 If you think this is an innocent little Bumble Bee you would be wrong in fact it’s a Bumble Bee Mimic Robber Fly no less ferocious than the one below, (Donna).

A more typical looking robber fly a little over an inch long. If you’re a small insect it will be a bad day if you run into one of these, (Donna). 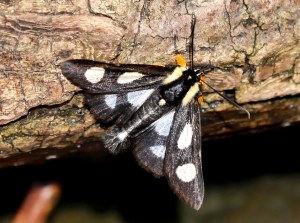 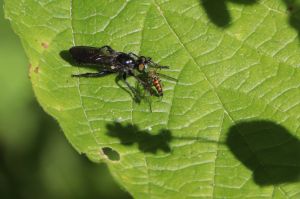 It’s a rough world for bugs. A long legged fly falls prey to a robber fly. 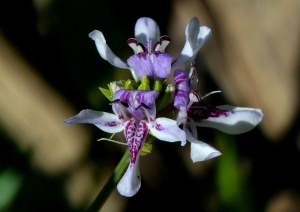 Water Willow at waters edge. Deer are known to browse the leaves and beaver and muskrat will consume the plant rhizomes. The submerged portion is home to many micro and macro invertebrates, (Donna). 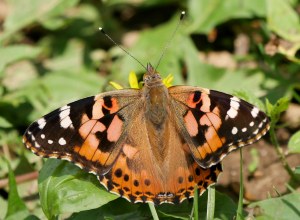 Painted Lady, one of the most common butterflies found on every continent accept Antarctica and Australia, their favorite food plant on which to lay their eggs is thistle, they do not overwinter and they can have long migrations up to 9,320 miles long, (Donna)

Hackberry Emperor, a butterfly not usually seen on flowers but on a warm day may land on exposed skin, (Donna).

Silver-spotted Skipper, one of the larger skippers, (Donna) 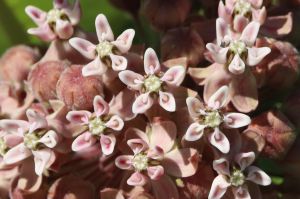 The beautiful flowers of the Milkweed. A very import plant for many insects most notably the Monarch Butterfly. 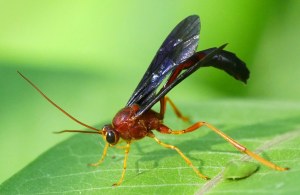 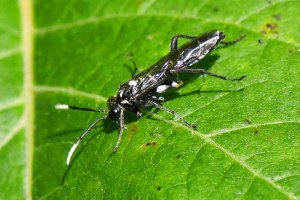 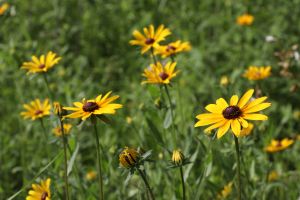 Golden-backed Snipe Fly, they can be found throughout Ohio, and are most often observed resting on low vegetation. They appear in the late spring and early summer, and have been observed mating in late May and early June, although timing likely varies across their range. Little is known about their life cycle. 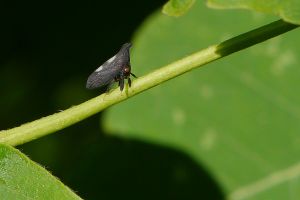 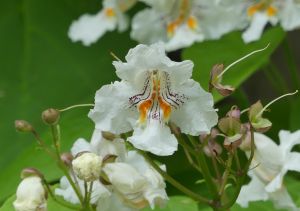 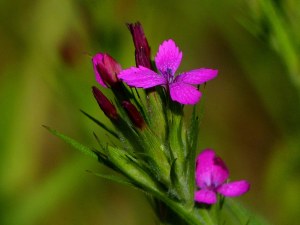 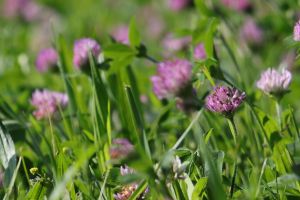 A field of clover.

A Mayfly falls prey to a jumping spider. Normally slow moving jumping spiders are capable of very agile jumps, when hunting, in response to sudden threats, or to navigate obstacles. They all have four pairs of eyes, with the pair positioned closer together being larger.

A small moth on Canada Thistle. 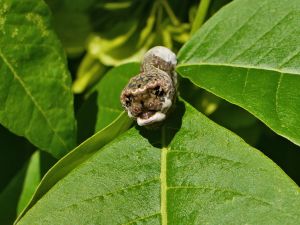 If it’s real lucky this Orange Dog caterpillar may become a Giant Swallowtail. 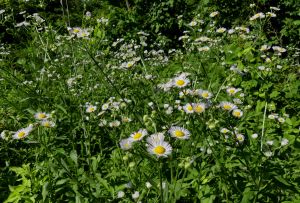 A field of fleabane. 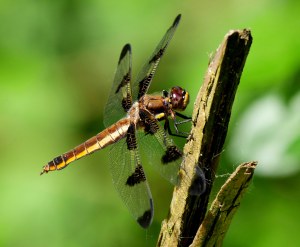 It’s hard to believe what’s out there in that small incredible world that goes largely unnoticed by most as we pursue our daily lives. In the hierarchy of human affection warm cuddly animals seem to be at the top with insects being at the other end of the spectrum and usually not considered a welcome intrusion. But as with most things the more you know and understand the more you grow to love.

A casual glance will not do. To discover wonder and beauty one must look closely with intention.

← An Uncommon Loon
The Orioles Fledge →

12 Comments on “Flowers and Flies”