A Journey Through Spring

It feels like we’ve been dodging raindrops at lot lately. However, the wetter than average spring, perhaps the new normal, has been great for the area wildflowers. We’ve continued to explore Griggs Reservoir Park near our home but have also made several trips to Glen Echo Park, Kiwanis Riverway Park, O’Shaughnessy Nature Preserve, and have traveled west to Cedar Bog as well as north to Magee Marsh, to name some of the other places explored. With a partial record in pictures of things seen, this is a celebration of all that this fleeting season has given us. Of particular note are the Yellow-billed Cuckoos that decided to make Griggs Reservoir Park their home for a few days recently. We also saw Scarlet Tanagers in the park after seeing few to none last year. What a treat!

(Should you desire, click on the image for a better view.)

Yellow-billed Cuckoos are one of the more entertaining birds to watch as they forage for food, Griggs Reservoir Park. They’re not a bird we see that often much less have an opportunity to photograph, (Donna).

A shot showing the distinctive markings of the underside of the tail.

There are always a few Bluebirds to see at Griggs Reservoir Park undoubtedly due to numerous trees that provide nesting cavities. 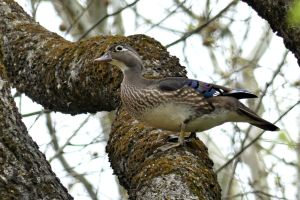 Catching this female Wood Duck out of the very corner of my spectacled eye as it flew into a nearby tree I at first thought it was a Morning Dove.

On a sunny cool spring morning this male Mallard Duck just wanted to catch some rays.

Every year we look forward to the arrival of the Baltimore Orioles at Griggs Reservoir Park. This year was no exception.

They are another very entertaining bird to watch.

As if all the migrating warblers at Magee Marsh weren’t enough we see this guy, Great Horned Owl owlet.

A male Red-winged Blackbird in all it’s splendor. A common resident at Griggs Reservoir Park, (Donna). 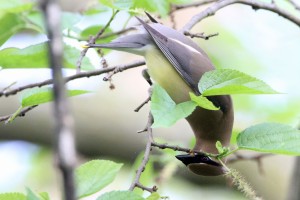 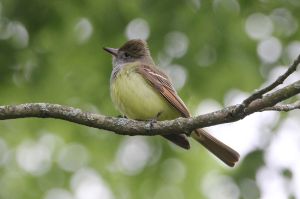 Just finishing up a snack of “warbler”, this Red-tailed Hawk stares us down, Griggs Reservoir Park. 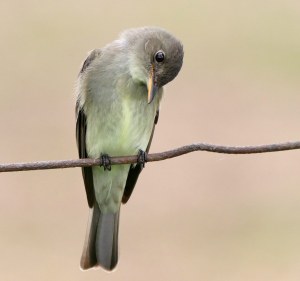 An Eastern Wood-Pewee is caught in a cute pose at Bigelow Pioneer Cemetery, (Donna). 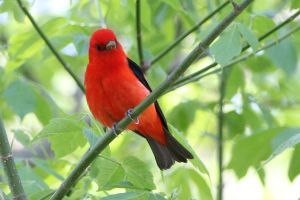 A Warbling Vireo seems to stare us down, Magee Marsh. 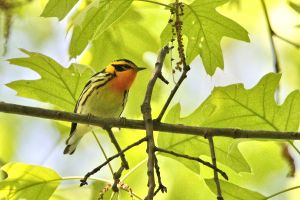 Blackburnian Warbler, Glen Echo Park. This small park centered around a stream and ravine is a hotspot for observing spring migrants. 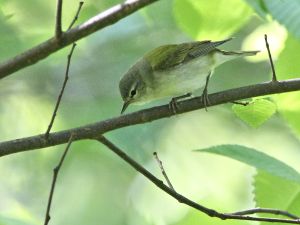 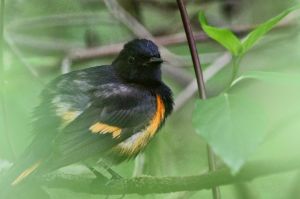 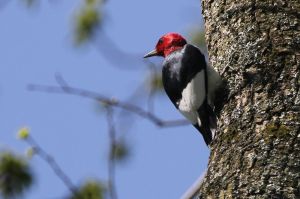 Red-headed Woodpecker, the first ever sighting at O’Shaughnessy Nature Preserve. 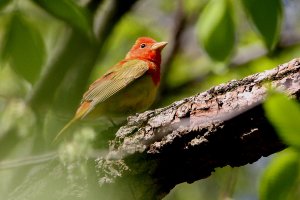 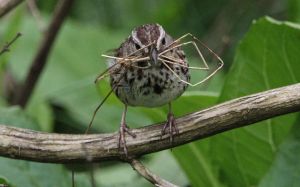 A Yellow-throated Warbler looks down from above, Griggs Reservoir Park. 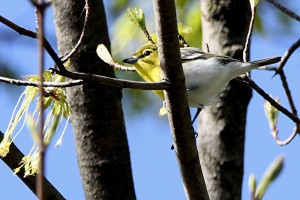 Couldn’t resist another view of this lovely bird.

How many turtles are on this log? Griggs Reservoir Park, (Donna). 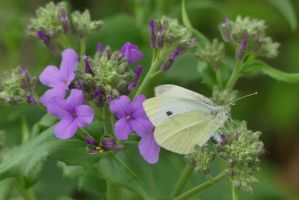 These Toadshade Trilliums from a few weeks ago were some of the last seen, Griggs Reservoir Park, (Donna).

Hoverfly on Spring beauty from a few weeks back. 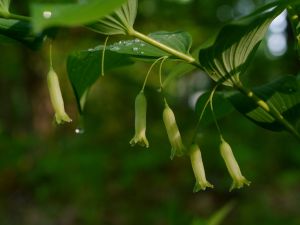 May Apple blossom from a few weeks ago, O’Shaughnessy Nature Preserve. 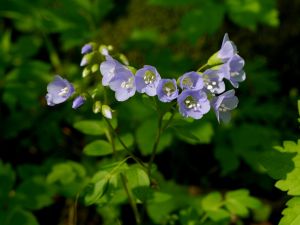 We were surprised to see this Morrel mushroom emerging through the mowed grass at Griggs Reservoir Park. 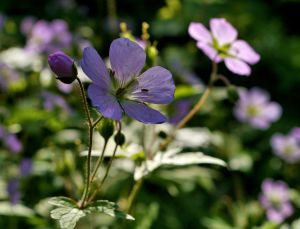 We hope you enjoyed this journey through spring into what now feels like early summer. We sadly leave the spring migrants behind for this year but experience tells us that there is always something new to see when exploring nature.

Future seasons become easier to count and the present one more precious with the passing of time, but in that scarceness we become richer with the sense of their magic.

← Paddling Into Nature On Griggs Reservoir
An Uncommon Loon →

14 Comments on “A Journey Through Spring”