After the previous post about early spring in Ohio we thought we’d travel back in time to late January and explore the natural beauty of Florida’s Lake Kissimmee State Park. After our third visit we now consider it a cornerstone for any winter camping trip to Florida. 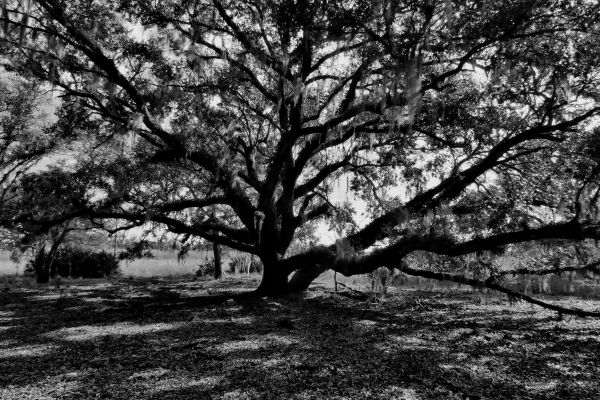 An advantage to many of the parks we visit in Florida is that they’re not separated by great distances so it’s an easy matter to pull up stakes in one and head down the road to the next. Lake Kissimmee SP is not far from Little Manatee River, is a much larger park so there is plenty of nature to explore without ever leaving the park. The greatest variety of birds can be seen if one quietly paddles the lake shore, Zipper Canal, or Tiger Creek but birding is also very rewarding along the hiking trails. When not observing warblers, gnatcatchers, or kinglets. the trails are a great way to see the park’s many Red Headed Woodpeckers and there are rumors of Scrub Jays although that’s one we have yet to see.

Folks sometimes ask if we’re concerned about taking expensive camera equipment in a canoe. The answer is yes, but we’ve been blessed to see many birds that we wouldn’t have otherwise and are sometimes lucky enough to get a picture so we feel it’s worth the risk. Within reason the canoe doesn’t limit the amount of equipment one can take and while you may get lucky from time to time don’t expect tack sharp “tripod” images. Where the canoe fails as a photography platform is when wind and water conditions create excessive motion or make the boat hard to control leaving little opportunity for pictures. Although some might not agree, a bonus when exploring overgrown Florida shorelines in a small boat is wondering if around the next bend one will startle a large gator. It’s an experience of “wildness” not availible in places further north. With that intro, below are some of the “canoe” birds seen during our two weeks at the park.

A favorite Lake Kissimmee perch for a group of Anhingas

A closer look at a male. A Bald Eagle along Tiger Creek which flows from Tiger Lake to Lake Kissimmee.

A Bald Eagle peers down at a prospective meal . . 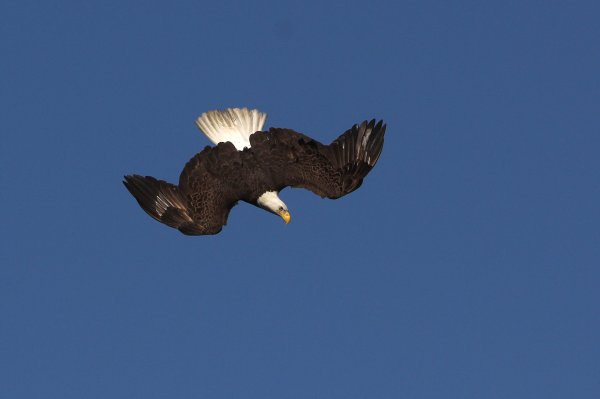 Hundreds of Tree Swallows in an early morning feeding frenzy on Lake Kissimmee.

A few take a break from the hunt, (Donna). 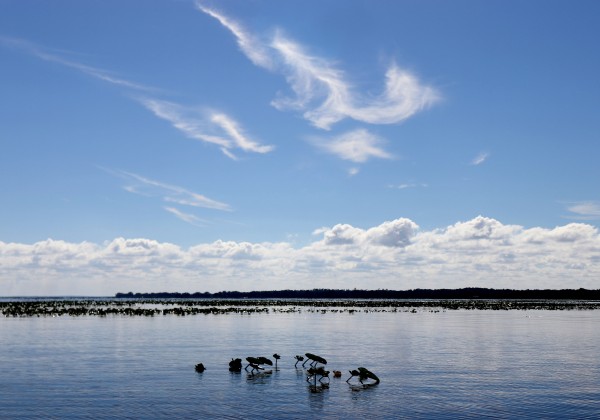 Immature Snail Kite along the Lake Kissimmee shoreline. The kites were a real treat because during last year’s visit, which was right after a hurricane, there were none to be seen. 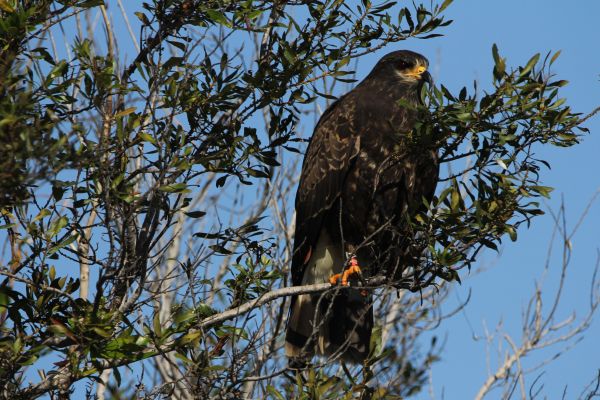 A Glossy Ibis reveals how it got it’s name, (Donna). 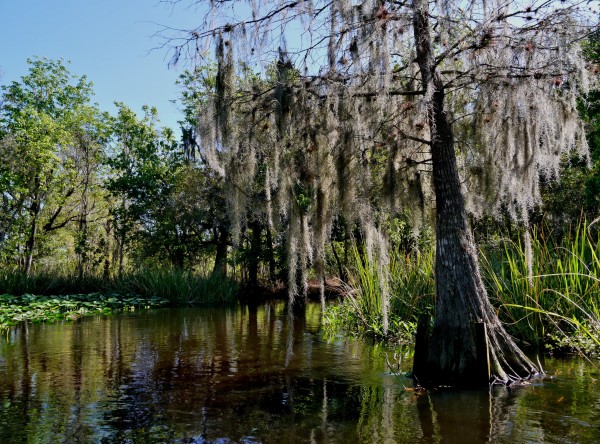 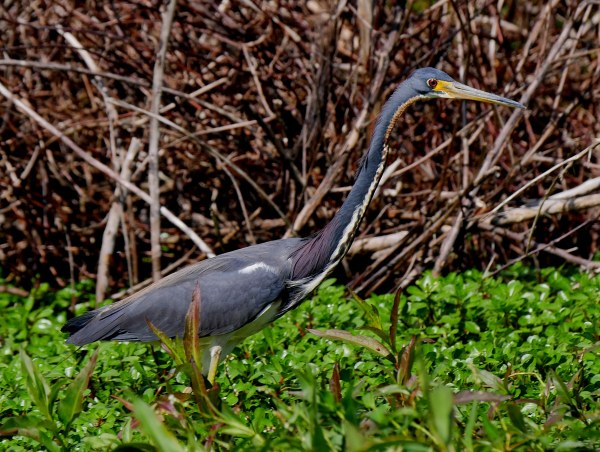 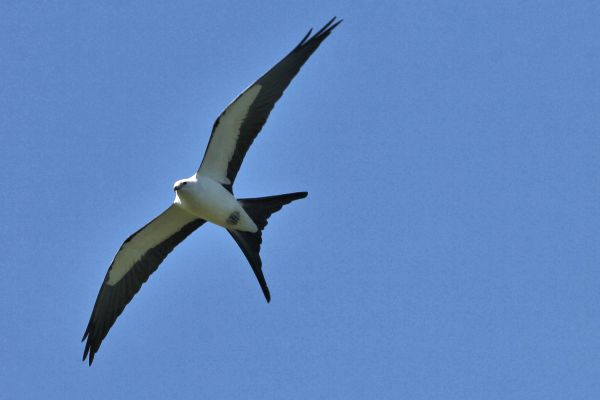 Swallow-tailed Kite over Tiger Creek. Observing them it appears that they often catch their prey in their talons and proceed to devour it on the wing. 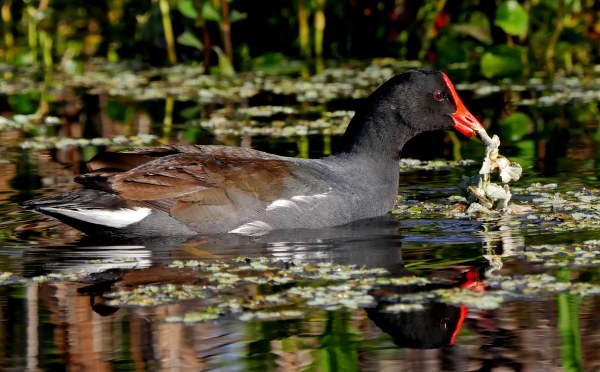 The hiking trails offer a different mix of birds and wildlife. The length of hike often dictates the type of equipment one decides to take along. Lugging ten pounds of camera equipment for seven or eight miles is not fun. One solution I saw this year was to modify a light weight golf cart to haul your equipment if the trail conditions and other restrictions allow. 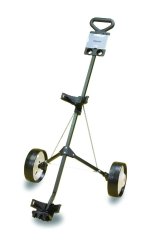 The type of golf cart that would be easy to modify to carry a tripod and camera with long telephoto lens.

When hiking park trails one thing that always amazes me is how different species of birds stay together or flock. One can walk for miles and not see much of anything and then all of a sudden there will be birds everywhere. Chickadees, titmouse, kinglets, gnatcatchers, and warblers are often seen together and often there will even be a blue jay in the mix. With the Live Oaks draped in Spanish Moss, the palmettos, and the pines, the landscape is enchanting so if the birds aren’t cooperating there is always something to appreciate.

Tufted Titmouse often alert us to the fact there may be warblers in the area. (Donna). 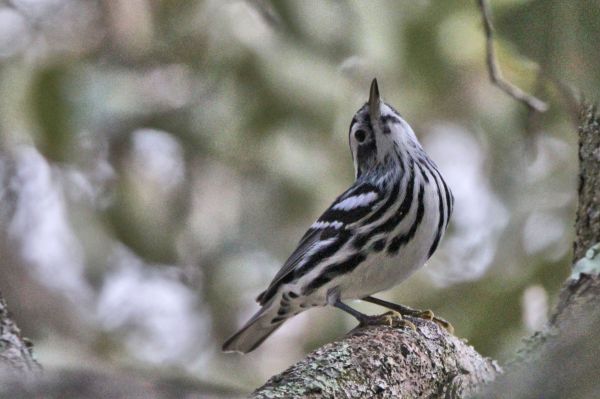 Sure enough, a Black and White Warbler makes an appearance. 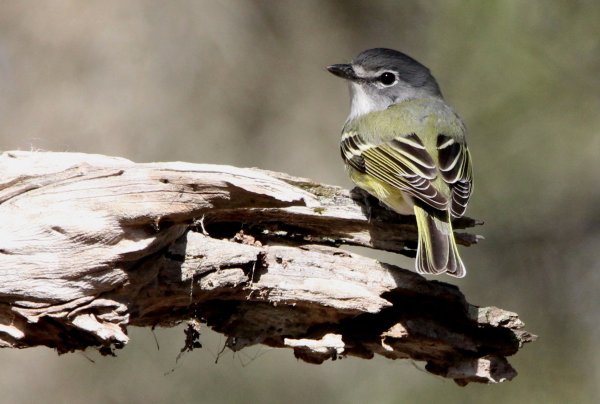 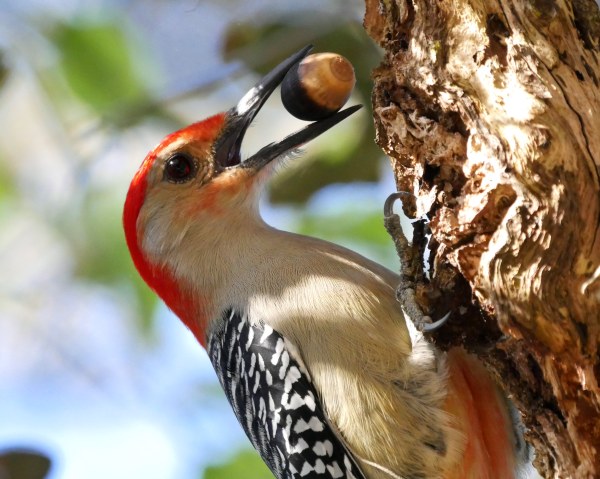 We weren’t quiet sure what this Red-bellied Woodpecker planned to do with the acorn, (Donna). 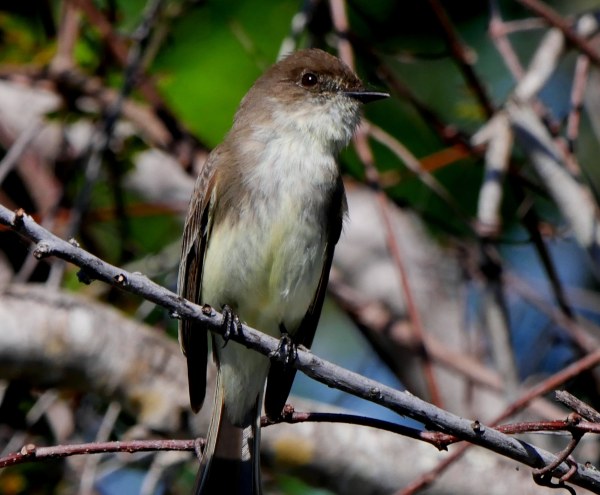 Sandhill Cranes. As common as they are we did not have the many opportunities to photograph them. 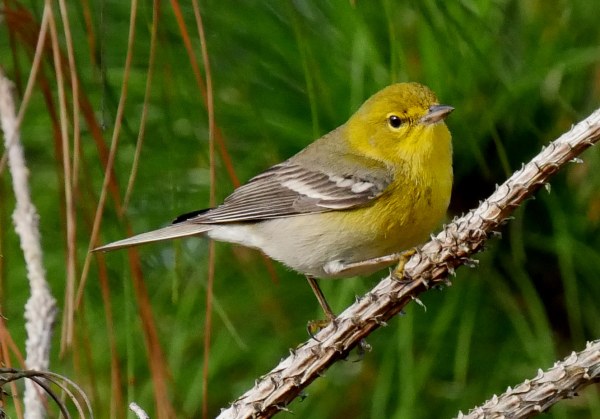 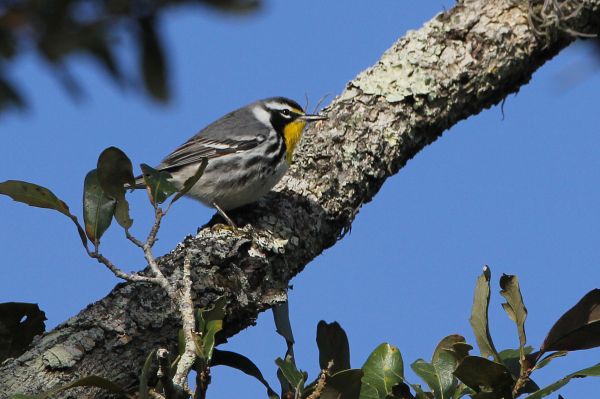 Bald Eagle and nest on Buster Island near the Cow Camp.

The Great Crested Flycatcher showed up near our campsite. It’s the largest of the flycatchers, (Donna). 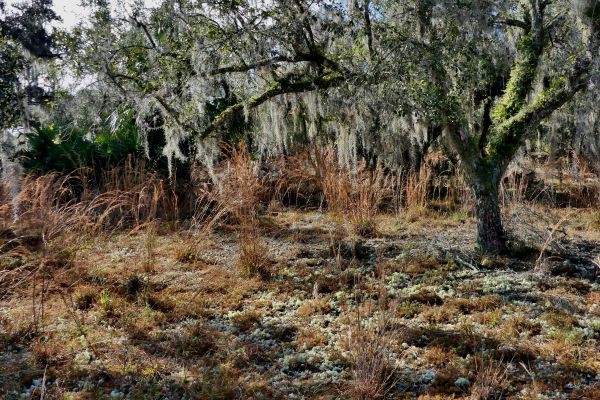 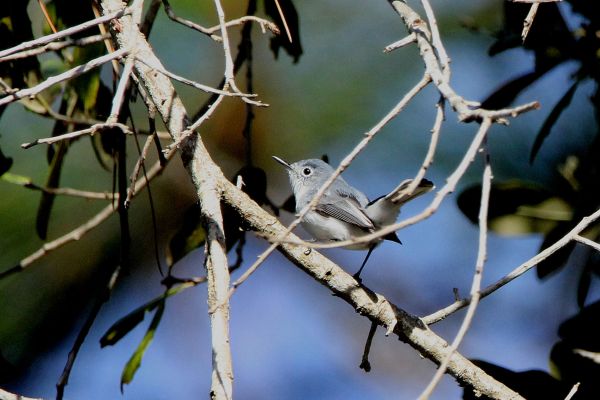 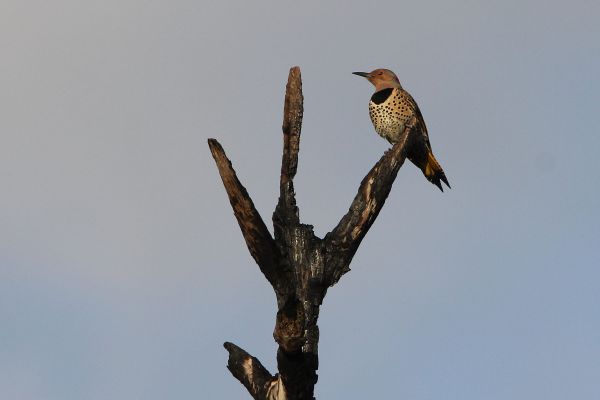 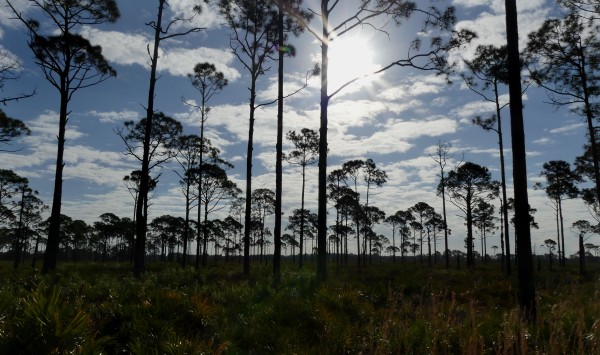 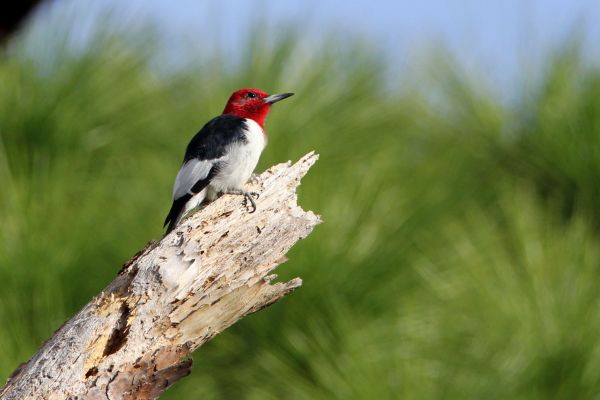 Red-headed Woodpeckers are quite common in the park.

Yellow-rumped Warblers competed with Palm and Pine Warblers for most common status.

If Florida had a state hawk, it sound be the always vocal Red-shouldered. 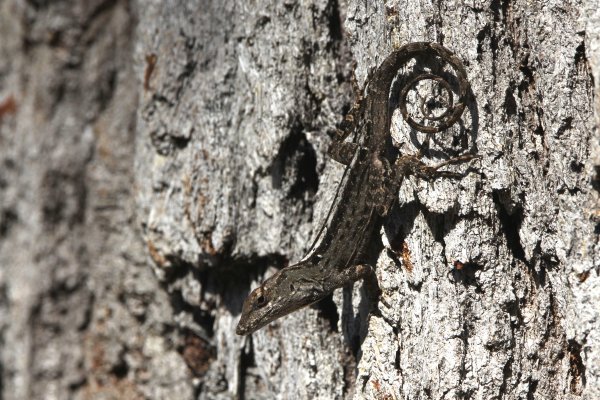 A Golden Silk Orb-weaver sun lit with a background of dark shade.

Fascinating fungi along the trail.

Yellow Milkwort is native and found throughout most of the Florida peninsula. Interestingly, the only place in the world it grows is Florida.

Grass highlighted by the winter sun. 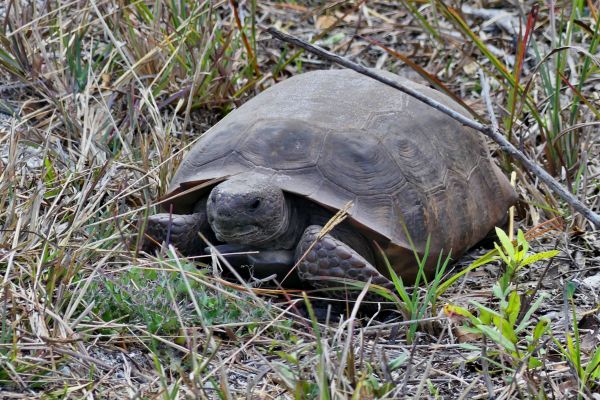 The long burrows, up to 40 feet long and 10 feet deep, of the endangered Gopher Tortoise are home to over three dozen other animal species that use them for shelter from harsh weather and predators. 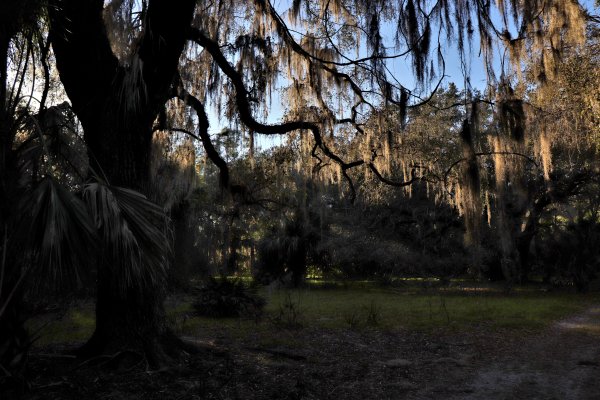 Yellow Jessamine is a common flowering vine in January and February.

A Spiny-backed Orb-weaver suspends over the trail.

Lake Kissimmee SP is one place we will be returning to next year. With its long hiking trails and extensive areas to explore by canoe there is always a new adventure waiting.

Under a clear blue sky,

as the canoe glides with anticipation along a winding creek

A solitary alligator swims slowly ahead

then slides below the surface and disappears

while not far away