It’s Spring and Love Is In The Air

In recent days we’ve made a number of trips to areas along Griggs Reservoir and the Scioto River not far from our home. It’s spring migration and the challenge is to see how many migrating birds we can spot right in our “neighborhood”. At some point we may change our emphasis and increase the number of trips we take to more distant birding locations, but for now we’re having fun concentrating on places close to home.

To date the most numerous warblers seen are the Palm and Yellow-rumped. While the Yellow-rumped is very common, with more subtle markings than many of it’s peers, I never tire of finding new beauty when I look at one. At Griggs Park the Baltimore Oriole is at the opposite end of the spectrum. Connecting trees with bright sunlit streaks of orange the males seem to be everywhere.  Should an oriole or other bird not be close by, it’s easy to find other things to appreciate this time of year.

The boardwalk at Kiwanis Riverway Park. One of our favorite birding spots. The water level was very high when this shot was taken.

When we arrive to photograph birds we sometimes find them “still getting ready”, 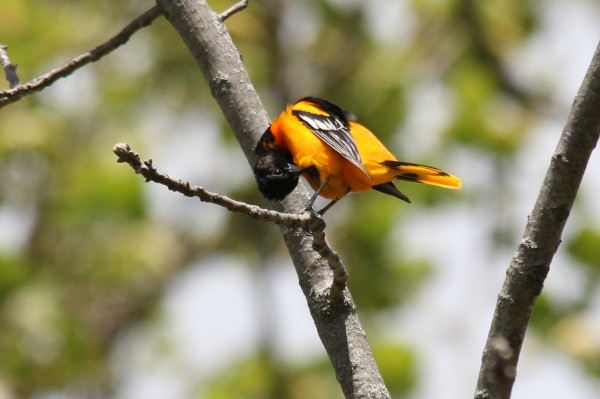 some may be busy doing other things, 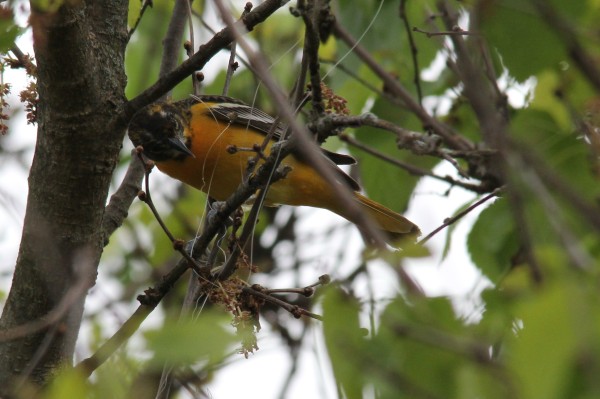 A female Baltimore Oriole appears to be trying to build a nest out of monofilament fishing line in Griggs Park. We try to pick up lost or discarded fishing line and tackle whenever we see it. 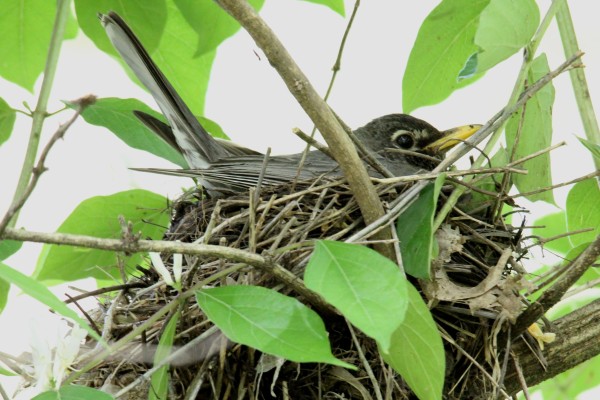 while most are usually ready when we get there,

Severely back lit, an illusive Black and White Warbler taxes the capabilities of the camera. 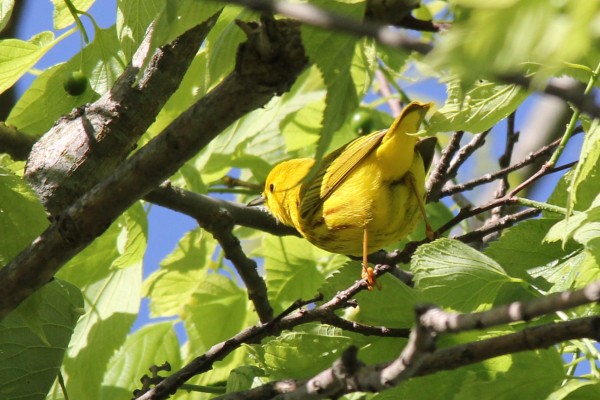 The Yellow Warbler is cute from any angle, Griggs Park. 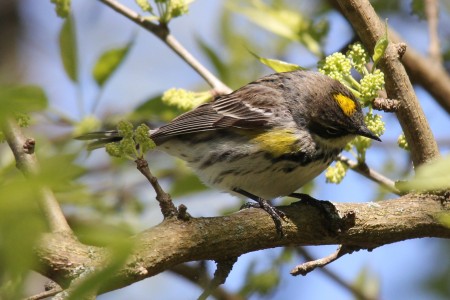 A better look at the unique crest on the Yellow-rumps head. 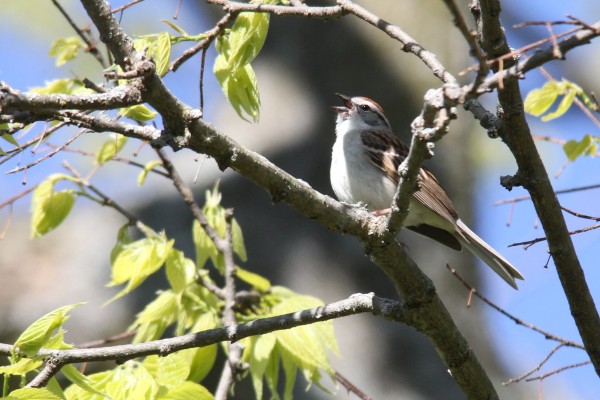 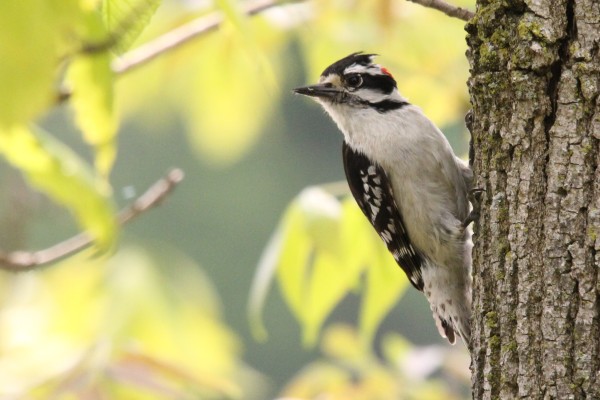 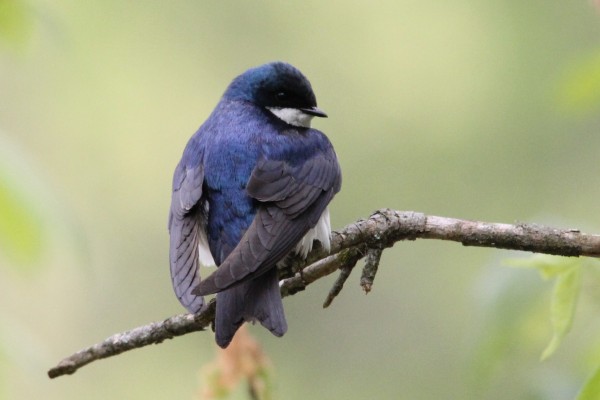 A Red-eyed Vireo ducts behind a small tree, Griggs Park.

It appears that this Chickadee has been spending entirely too much time with it’s Tufted Titmouse friends, Griggs Park. 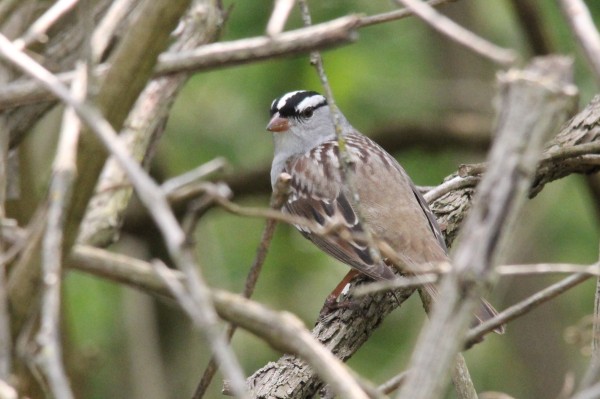 Seeing this White-crowned Sparrow was a real treat, Griggs Park. “White-crowned Sparrows typically breed in the far north in open or shrubby habitats, including tundra, high alpine meadows, and forest edges. Patches of bare ground and grasses are important characteristics. During winter and on migration these birds frequent thickets, .   .   . “, from The Cornell Lab of Ornithology.

but a few are just trying to get away. 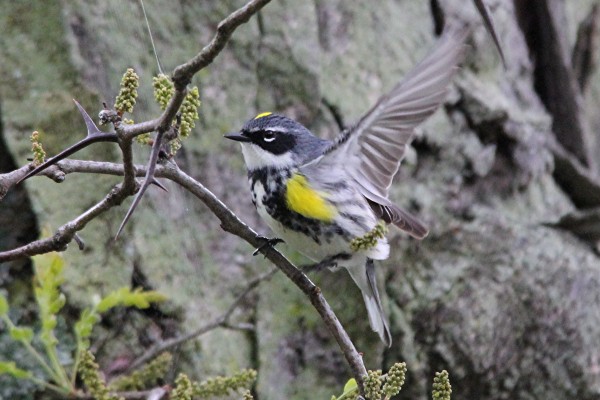 Other birds were engaged in finding a find a dry perch, made all the more challenging by recent heavy rains.

In the company of friends a Great Blue Heron looks on as the very high Scioto River races by. 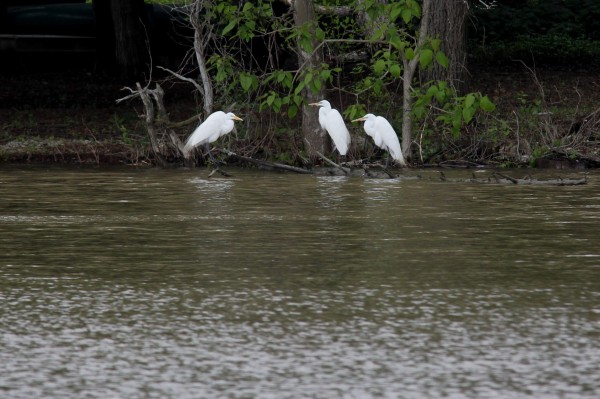 In recent days Great Egrets seem to be everywhere along both the reservoir and river, Griggs Park.

Out on the reservoir a Great Blue Heron floats by on a tree branch.

Many flowers have undoubtedly benefitting from the recent rain.

Stumped again, the flower of a small unidentified flowering tree or bush. Is it a garden escapee? 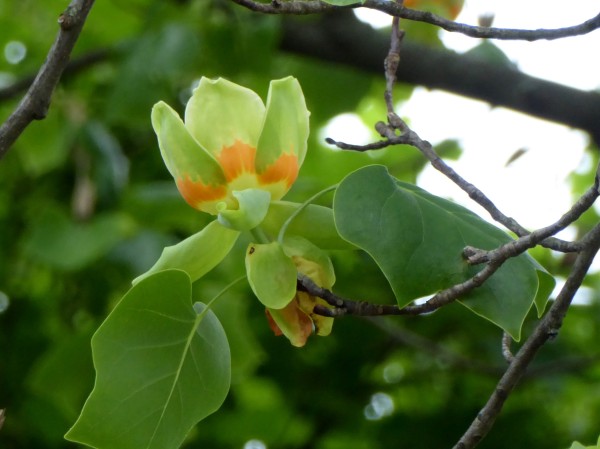 The flower of the Tulip Tree. Native to eastern North America from southern Ontario and Illinois eastward to Massachusetts and Rhode Island and south to central Florida and Louisiana, Tulip Trees can grow to more than 160 ft in virgin cove forests of the Appalachian Mountains. (Wikipedia) 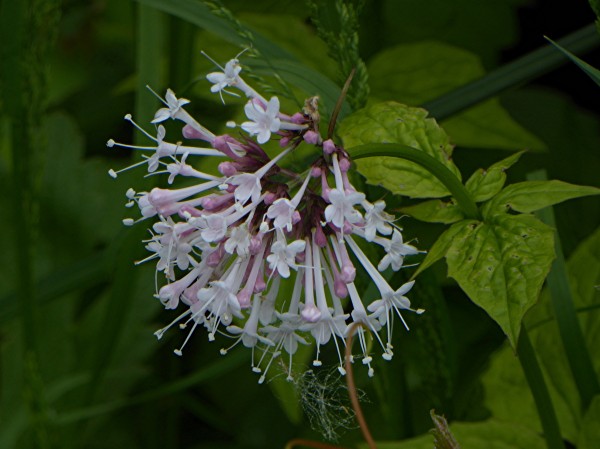 You never know what might be hiding next to a flower.

Heading back to the car at the end of one outing, my sharp eyed wife spotted three Northern Water Snakes celebrating the season. The males are quite a bit smaller than the female. These snakes are fairly common along the river and reservoir. However, unlike the various species of turtles which always seem to be around, they aren’t often seen so it was a real treat to see them! 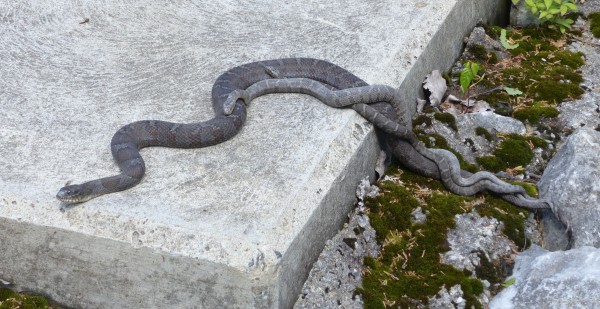 Large female with two smaller male Northern Water Snakes, Griggs Park. They mate from April through June and do not lay eggs like many other snakes. Instead, the mother carries the eggs inside her body and gives birth to free living young and may have as many as thirty at a time, but the average is eight. They are born between August and October. Mothers do not care for their young; as soon as they are born, they are on their own. (Wikipedia)

The males were in competition for the female’s affection.

The larger male seems to have won, at least momentarily. 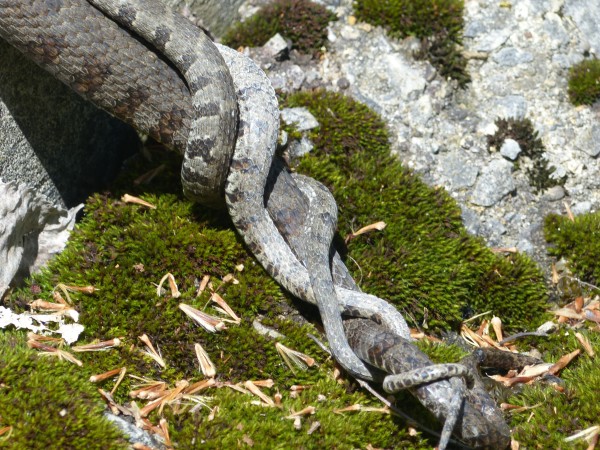 A tangle of tails.

After missing shots of numerous fast moving warblers and the recent challenge when I tried to capture the Black and White, I’ve decided to upgrade my otherwise excellent Canon 60D camera body to a Canon 80D. For the time being the bird camera lens will continue be a Sigma 150-500mm. Future posts will reveal how well it all works out. Thanks for stopping by.

PS: As is often the case, Molly Cat sat watching intently as I finished this blog. I’m glad I’m not a mouse!

Should you wish, prints from various posts may be purchased at Purchase a Photo. If you don’t find it on the link drop us a line.