A Spring Day At Magee Marsh

It was mid morning, sunny, the gentle lake breeze was cool, but warmed by the sun we felt energized. That was a good thing because the two and a half hour drive from Columbus had left us feeling just a little lethargic. It was our annual visit to Maggee Marsh in search of migrating warblers and we had just arrived at the parking lot adjacent to the boardwalk. Once in the refuge, located along the south shore of Lake Erie, we had made our way toward the lake on a very straight two lane road bordered by wetlands. On the ground and overhead a welcoming committee of more than the usual number of Great Egrets, a generous smattering of Great Blue Herons, a Snowy Egret, as well some of the other usual suspects, had greeted us. Near the lake, high in a Cottonwood, an active eagle’s nest could be seen. It felt like it was going to be a good day in birders paradise!

One of many Great Egrets seen.

On this particular morning, as I hoisted my heavy camera over my shoulder, I couldn’t help thinking it would be nice to enlist all my senses and just be there with only binoculars in hand. But you never know what might be seen so better take the camera. After all, it’s a tool that does allow one to better tell stories and that’s good. However, when it’s pressed against my face I’m removed from the experience I seek to capture, caught up in the details (see PS: below) of taking a reasonable photograph of an object that refuses to sit still among what seems like an infinite number of twigs, leaves, and branches. Sometime it might really be nice just to hang out with these little guys. Besides, it’s not like there’s a shortage of excellent photos on the web of almost any bird you could imagine. However, I’m not quite there yet, so with the camera in hand the internal debate goes on.

In the spring the area acts as a stop off point for migrating warblers as they pause to rest and wait for a favorable wind to carry them north across the lake to summer breeding grounds. The boardwalk, right along the lake with wetlands to the south, winds it’s way through a wet low lying area with numerous tall trees, including many Cotton Woods, and plenty of bushes and other ground cover that warblers as well as other birds seem to enjoy. This makes them especially easy to see.

In past years we’ve gotten a fairly early start and have seen birds in the morning but our experience has been that things don’t really get cranked up until the afternoon. Such was the case on this trip. After lunch a lot more birds were seen. It may have something to do with temperature as it did warm up considerably as the day progressed.

Ruby Crowned Kinglets were everywhere. That was the case throughout the day. 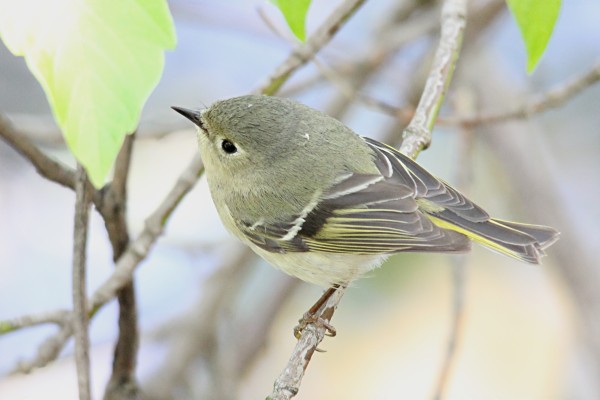 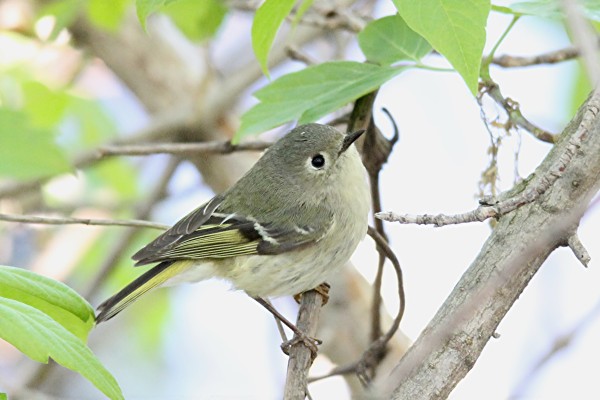 The Yellow Warblers were also hard to miss. 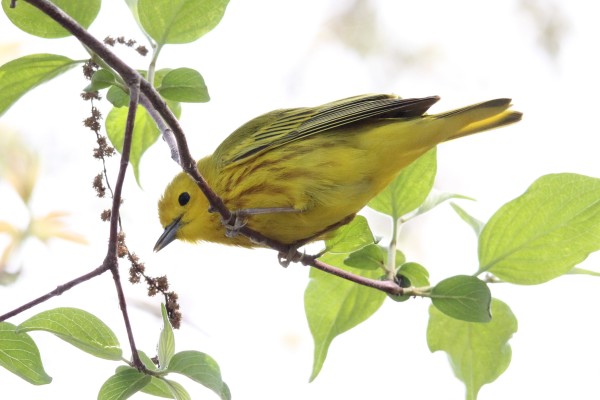 As the day went on we saw other birds. We were especially excited to see Black-throated Blue Warblers. 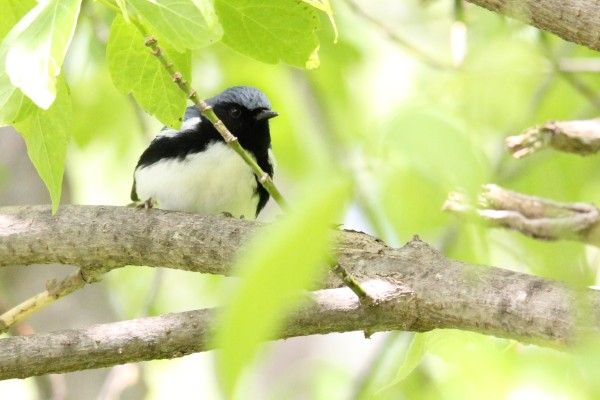 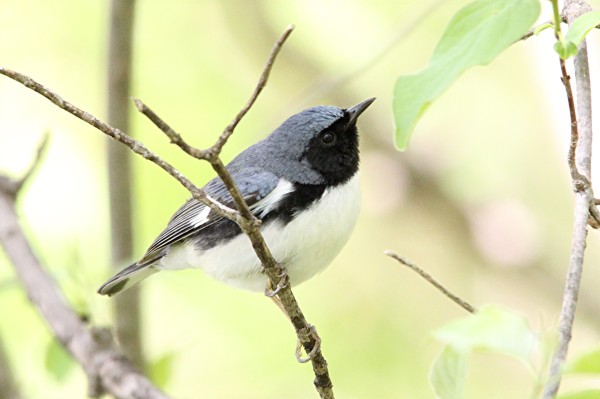 A Cape May Warbler proved a challenge to photograph. 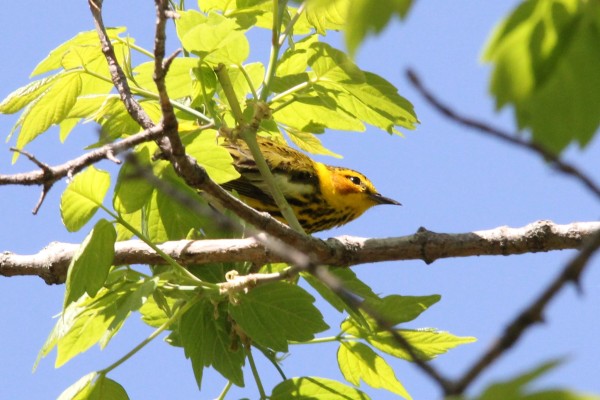 One of Ohio’s most commonly seen warblers made it’s presence known.

Looking more like a thrush than a warbler, it was great to see a, not often seen, Ovenbird. 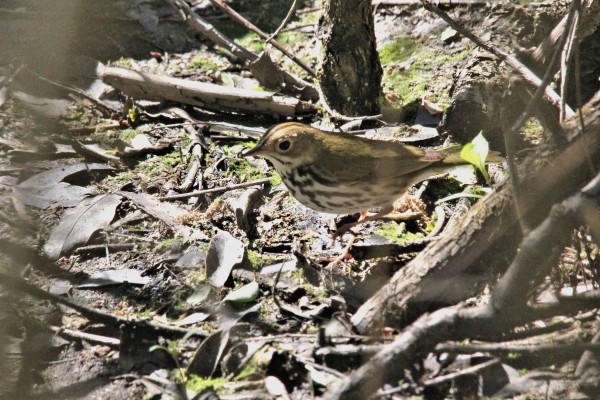 We did also see a thrush.

Catbirds made a good showing along the boardwalk. 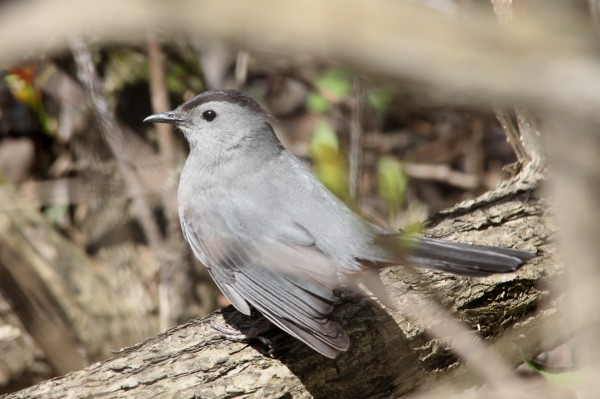 Blue-gray Gnatcatchers were also trying to get our attention.

A Tree Swallow was seen at it’s nesting cavity.

White-throated Sparrows were hard to ignore in the low underbrush. 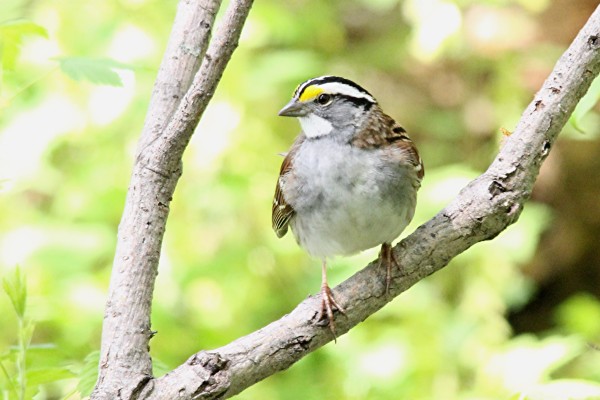 Not far from the boardwalk Solitary Sandpipers were busy foraging for food. 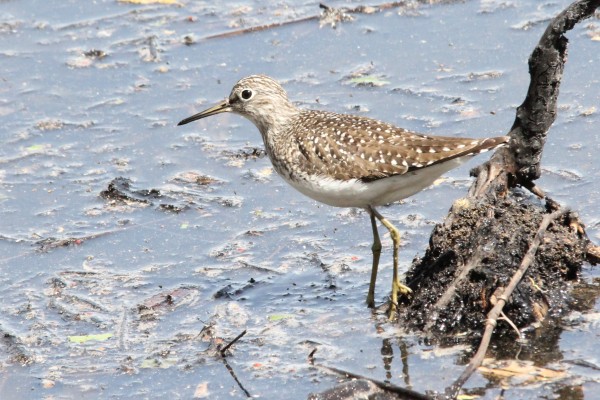 Along one of the canals, and partially hidden by low lying foliage, several Green Herons were spotted.

Tinged the green by a nearby leaf this shot captured a Green Heron waiting for lunch, (Donna).

At the opposite end of the spectrum from the kinglets, Bald Eagles were getting on with their life.

Bald Eagle watches it’s nest, one of two in the immediate area. (Donna).

Eagle chick testing it’s wings while the other seems to be taking cover.

Exercise session over, the other chick pops up.

Despite the grand reception as we entered the refuge, we didn’t see as many warbler species as in past years. However, there were still plenty of birds. While photographs were obviously taken, enough time was an spent listening and looking, as the fragrance of flowering bushes occasionally wafting past on the cool lake breeze, that I was there and not just behind the camera lens.

PS: On a technical note, many of the photos taken on this trip were blurry or overexposed to the point of not being usable.  A few could be salvaged through post processing. After arriving home exposure compensation was found to be set at +1.3 EV and aperture had somehow been bumped to f13 for at least part of the time. It’s not like this is the first time I’ve taken a picture but I got lazy. Always check your settings and double check them throughout the day.

4 Comments on “A Spring Day At Magee Marsh”